Kirby Puckett (March 14, 1960 – March 6, 2006) was an American professional baseball player. He played his entire 12-year Major League Baseball (MLB) career as a center fielder for the Minnesota Twins (1984–95). Puckett is the Twins' all-time leader in career hits, runs, and total bases. At the time of his retirement, his .318 career batting average was the highest by any right-handed American League batter since Joe DiMaggio.

Puckett was admired throughout his career. His unquestionable baseball pskills, outgoing personality and energy, charity work, community involvement, and attitude earned him the respect and admiration of fans across the country. In 1993, he received the Branch Rickey Award for his lifetime of community service work. 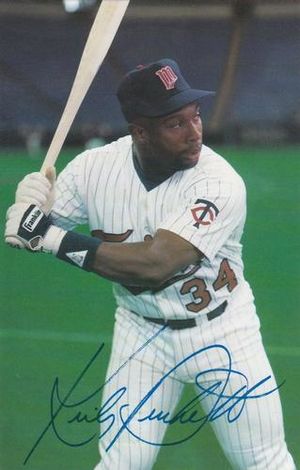 Puckett was born in Chicago, Illinois, and he was raised in Robert Taylor Homes, a housing project on Chicago's South Side. He played baseball for Calumet High School (Chicago). After receiving no scholarship offers following graduation, Puckett went to work on an assembly line for Ford Motor Company. However, he was given a chance to attend Bradley University and after one year transferred to Triton College. Despite his 5' 8" frame, the Minnesota Twins selected him in the first round of the 1982 Major League Baseball January Draft-Regular Phase.

After signing with the team, he went to the rookie-league Elizabethton Twins in the Appalachian League. In 1983, Puckett was promoted to the Single-A Visalia Oaks in the California League. After being promoted to the AAA Toledo Mud Hens to start the 1984 season, Puckett was brought up to the majors for good 21 games into the season. 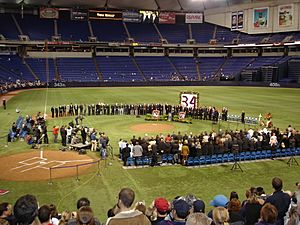 The Memorial for Kirby Puckett at the Metrodome on March 12, 2006

On the morning of March 5, 2006, Puckett suffered a massive stroke at home. He underwent emergency surgery that day to relieve pressure on his brain; however, the surgery failed, and his former teammates and coaches were notified the following morning that the end was near. Many flew to Phoenix to be at his bedside during his final hours along with his two children Kirby Jr. and Catherine. His fiancee never left his side. Puckett died on March 6, just 8 days from his 46th birthday, shortly after being disconnected from life support.

A private memorial service was held in the Twin Cities suburb of Wayzata on the afternoon of March 12 (declared "Kirby Puckett Day" in Minneapolis), followed by a public ceremony held at the Metrodome attended by family, friends, ballplayers past and present, and approximately 15,000 fans.

On April 12, 2010, a statue of Puckett was unveiled at the plaza of Target Field in Minneapolis. The plaza runs up against the stadium's largest gate, Gate 34, numbered in honor of Puckett. The statue represents Puckett pumping his fist while running the bases, as he did after his winning home run in Game 6 of the 1991 World Series.

All content from Kiddle encyclopedia articles (including the article images and facts) can be freely used under Attribution-ShareAlike license, unless stated otherwise. Cite this article:
Kirby Puckett Facts for Kids. Kiddle Encyclopedia.