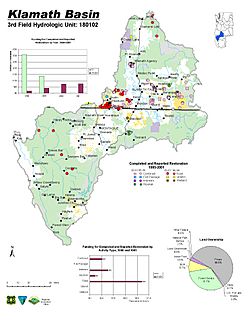 The Klamath River Basin extends from Southern Oregon into Northern California. The region is the historic home of the Native American Klamath, Modoc, and Yahooskin peoples.

The Klamath Basin Restoration Agreement (KBRA) is an American multi-party legal agreement determining river usage and water rights involving the Klamath River and Klamath Basin in the states of California and Oregon. Discussion of the KBRA began in 2005. Congress failed to pass legislation that would implement the KBRA by the January 1, 2016 deadline.

The idea behind the document originally stemmed from the 2001 irrigation water shutoff to Klamath Project farmers, when water was withheld from the irrigators in favor of the threatened coho salmon and the endangered Lost River Sucker. Downstream populations of coho salmon are within the Southern Oregon/Northern California Evolutionary Significant Unit and are listed as threatened (2011).

That summer, a symbolic bucket brigade was held, where nearly 20,000 people passed 50 buckets of water, one for each state, from Upper Klamath Lake to the A canal that supplies water to the Klamath Project.

The final document was signed on February 18, 2010 in Salem, Oregon. Among the more notable signatories to the agreement was the Governor of California, Arnold Schwarzenegger, the Governor of Oregon, Ted Kulongoski, and the Chairman of the Klamath Tribes, Joseph Kirk.

Congress failed to pass legislation that would implement the KBRA by the January 1, 2016 deadline. A new agreement, the Klamath Hydroelectric Settlement Agreement (KHSA) was signed on April 6, 2016 which plans to remove four hydroelectric dams (the Copco 1, Copco 2, J.C. Boyle, and Iron Gate) by 2020.

All content from Kiddle encyclopedia articles (including the article images and facts) can be freely used under Attribution-ShareAlike license, unless stated otherwise. Cite this article:
Klamath Basin Restoration Agreement Facts for Kids. Kiddle Encyclopedia.