Kids Encyclopedia Facts
Not to be confused with Klamath Diversion or Klamath River Hydroelectric Project.

The Klamath Project is a water-management project developed by the United States Bureau of Reclamation to supply farmers with irrigation water and farmland in the Klamath Basin. The project also supplies water to the Tule Lake National Wildlife Refuge, and the Lower Klamath National Wildlife Refuge. The project was one of the first to be developed by the Reclamation Service, which later became the Bureau of Reclamation. 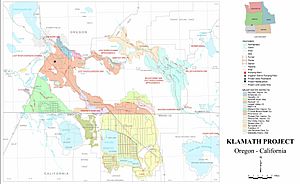 Some 225,000 acres (91,000 ha) of rangeland have been transformed into active farmland through the Klamath Project. Of that total, 80,000 acres (32,000 ha) were recovered by draining a portion of Lower Klamath Lake, a shallow marsh straddling the Oregon-California border between the California towns of Dorris and Tulelake. Tule Lake was also reduced in size by diverting water from Lost River to the Klamath River.

Farmers in the project raise barley, alfalfa hay, and other hay, oats, potatoes, and wheat. The Klamath Basin is on the Pacific Flyway and the Klamath Basin National Wildlife Refuges Complex is visited by migratory game birds every year.

The project should not be confused with the Klamath River Hydroelectric Project, a set of hydro dams on the mainstem of the Klamath operated by for-profit energy company PacifiCorp. The Link River Dam belongs to both. 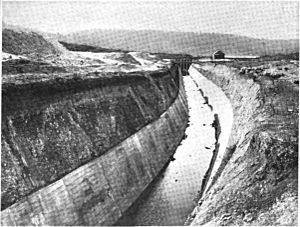 Klamath Project main canal, as depicted in the 1908 Report of the Oregon Conservation Commission.

A contract executed February 24, 1917, between the California-Oregon Power Company (now Pacific Power) and the United States authorized the company to construct the Link River Dam for the benefit of the project and for the company's use, and in particular extended to the water users of the Klamath Project certain preferential power rates. The dam was completed in 1921.

In more recent times, the Klamath Project has been the focus of nationwide controversy. The Lost River and Shortnose suckers were listed as endangered in 1988. This, as well as concerns for salmon runs, led to a cutoff of irrigation water to local farmers on April 6, 2001. After many protests by farmers and concerned citizens alike, the decision was reversed the next year. The impact of the salmon kill was detailed in the book Salmon is Everything. A 2002 report by the National Research Council however, determined that the decision to stop delivery of irrigation water in 2001 was not scientifically justified and that the 2002 fish kill was caused by a combination of natural factors.

A massive die off of salmon occurred in 2002 due to low water and high temperatures in the lower reaches of the river during the salmon migration. Studies showed that drought conditions and low flow from the entire drainage were among the factors that caused a unique mix of conditions to allow a gill rot disease to attack the salmon population.

The conflict in balancing the economic and ecological concerns of the region was the focus of the 2006 book River of Renewal: Myth and History in the Klamath Basin. Today, there is still much antagonism between opposing sides on this issue. 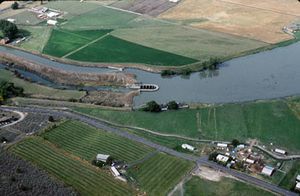 The Klamath Project contains seven dams, all of them on tributaries of the Klamath River itself. In chronological order of completion, they are:

There are over 717 miles (1,154 km) of canals, laterals and diversion channels in the Klamath Project. The canals transport irrigation water from Klamath Lake and the Klamath River, Clear Lake and the Lost River, and Tule Lake. There are two tunnels: the "A" Canal (the main canal that starts just above the Link River Dam) has an underground section as it flows through Klamath Falls, and the Tule Lake Tunnel.

There are almost 728 miles (1,172 km) of drainage canals in the Klamath Project which allow land that would otherwise be wetlands to be farmed. The Lower Klamath Lake was 80,000 acres (32,000 ha) before it was drained and would naturally evaporate about 240,000 acre feet (300,000,000 m3) each summer. This is roughly equivalent to the annual delivery of the A canal.

As opposed to the government-owned irrigation dams of the Klamath Project on upper tributaries, the seven dams of the Klamath River Hydroelectric Project are operated by for-profit energy company PacifiCorp. The systems share one facility, the Link River Dam, which is owned by the United States Bureau of Reclamation but operated by PacifiCorp primarily to regulate its own downstream water supply, and secondarily for power generation.

Controversies over water management since 2001 have involved the entire river. That year, a court order withheld irrigation water from Klamath Project farmers, to comply with mandated river levels for the threatened Coho salmon and the endangered Lost River Sucker. Downstream populations of Coho salmon are within the Southern Oregon/Northern California Evolutionary Significant Unit and are listed as threatened (2011).

All content from Kiddle encyclopedia articles (including the article images and facts) can be freely used under Attribution-ShareAlike license, unless stated otherwise. Cite this article:
Klamath Project Facts for Kids. Kiddle Encyclopedia.