Gerber Reservoir is an irrigation impoundment created by Gerber Dam. It is located in southern Klamath County, Oregon, United States. The reservoir covers 3,815 acres (1,544 ha). The dam and reservoir are named in honor of Louis C. Gerber, an early pioneer who owned much of the land flooded by the reservoir. Today, the reservoir and surrounding property is owned by the United States Government. It is administered by the Bureau of Reclamation and the Bureau of Land Management. Gerber Reservoir is a popular outdoor recreation site with two campgrounds along its west shore.

Native Americans occupied sites around what is now Gerber Reservoir for perhaps 6,400 years before the first European settlers arrived in the area. Ancient campsites have been found in the area of Gerber Reservoir. Family bands of Klamath and Modoc peoples used these sites from early spring through fall for hunting, fishing, and plant gathering activities.

Louis C. Gerber (1854–1930) and his family were among the first whites to settle in the area. In the mid-1880s, Gerber used the Swamp Act to acquire 840 acres (340 ha) along Miller Creek on the high plateau northeast of the Langell Valley. In 1895, he filed a homestead claim on an adjacent 168-acre (68 ha) parcel. By 1915, Gerber had also purchased 20 abandoned homesteads in the same area. He consolidated all these properties into the Gerber Ranch. In 1923, Gerber sold 1,008 acres (408 ha) to the United States Government. This area was flooded when the Bureau of Reclamation completed the Miller Creek impoundment dam in June 1925. Both the dam and the reservoir it created were named in his honor.

During World War II, the island in the middle of Gerber Reservoir was used as a United States military bombing range. Today, ospreys and pelicans nest on the island. 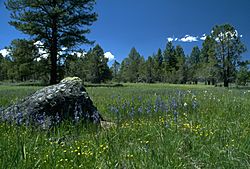 Forest and meadow near Gerber Reservoir

Gerber Reservoir is an irrigation impoundment created by Gerber Dam. The reservoir covers 3,815 acres (1,544 ha). It is approximately 5 miles (8.0 km) long and 2.3 miles (3.7 km) wide. The reservoir has a branching shape with shallow arms that follow various watershed drainages. There is one permanent island in the middle of the reservoir. The reservoir has an average depth of 27 feet (8.2 m) with a maximum depth of 65 feet (20 m). Its elevation is 4,835 feet (1,474 m) above sea level.

While very few aquatic plants live in the shallow branches, the reservoir is still very productive. Its trophic state is classified as eutrophic. A combination of suspended inorganic matter and phytoplankton growth limit the water's transparency. In the main part of the reservoir, the water is deep enough for thermal stratification. In the deeper thermal layers, there is less oxygen than is found near the surface.

The reservoir is in the rain shadow of the Cascade Range. As a result, the weather in the Gerber area is typical of high plateaus in the northern Basin and Range Province. It is characterized by ample sunshine, low precipitation, and wide temperature ranges. Low humidity causes rapid evaporation. As a rule, winters in the Gerber area are long and summers mild.

The annual average high temperature at Gerber Reservoir is 46.6 °F (8 °C). The warmest month is normally July, which has an average high of 84.9 °F (29 °C). The annual average low temperature is 32.4 °F (0 °C). January is normally the coldest month, with an average low of 20.1 °F (−7 °C). Gerber gets an average of 14 inches (360 mm) of precipitation per year, much of it coming as snow. Precipitation occurs mainly in the winter with smaller amounts in the fall and spring. Summers are generally dry except during localized thunderstorms. The prevailing winds are from the west and south.

The meadows near the reservoir have camas and tufted hairgrass. Wetlands along the reservoir shoreline have sedge, cattails, bulrushes, arumleaf arrowroot, pond lily, sago pondweed, widgeon grass, sego lily, burr weed, and tule. There are also willows in riparian areas along drainages that empty into the reservoir. 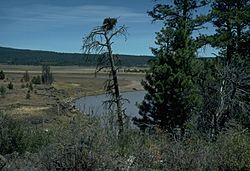 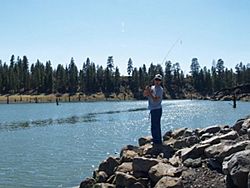 Fishing along the shore of Gerber Reservoir

The Bureau of Land Management actively manages the area around Gerber Reservoir. Over the years, two campgrounds have been developed at the reservoir. Together, they provide a wide range of facilities including potable water, restrooms, campsites, picnic tables, cooking grills, boat ramps, floating docks, and fish cleaning stations. Garbage collection and a recreational vehicle dump station are also provided. Fees are charged for camping and day use at both campgrounds. There are also some primitive campsites near the reservoir. There is no fee for using the undeveloped camp sites.

There are two campgrounds at Gerber Reservoir with a total of 50 developed campsites. Both of the campgrounds are located along the west shore of the reservoir. They are open year around. However, the campground facilities are only maintained during the summer, from mid-May to mid-September. Gerber North campground has 25 campsites, as does Gerber South campground. During the summer, the reservoir is a popular place for fishing, boating, canoeing, and kayaking. There are also trails near the lake for hiking and mountain biking. The Gerber Watchable Wildlife Tour has nine wildlife viewing stations near the reservoir. In addition, Gerber Reservoir is a stop on the Klamath Basin Birding Trail.

There are a number of archeological sites near the reservoir. It is against Federal law to disturb or remove artifacts from these sites. Visitors who happen upon an archeological sites are asked to contact the Bureau of Land Management office in Klamath Falls.

Gerber Reservoir is located in Klamath County, Oregon. It is 42 miles (68 km) east of Klamath Falls and 93 miles (150 km) west of Lakeview, Oregon, off of Oregon Route 140. To get to the Gerber Reservoir campgrounds from Klamath Falls, take Route 140 east to Dairy, Oregon. At Dairy, turn south onto Oregon Route 70 and travel 5 miles (8.0 km) to Bonanza, Oregon. From there, continue on East Langell Valley Road for 11 miles (18 km); then turn left onto Gerber Road. Follow Gerber Road for 8.5 miles (13.7 km) to the Gerber recreation area.

All content from Kiddle encyclopedia articles (including the article images and facts) can be freely used under Attribution-ShareAlike license, unless stated otherwise. Cite this article:
Gerber Reservoir Facts for Kids. Kiddle Encyclopedia.