Klickitat is a census-designated place (CDP) in Klickitat County, Washington, United States. The population was 417 at the 2000 census.

Klickitat is an unincorporated town located along the Klickitat River. Once the site of a lumber mill it is now primarily a bedroom community. The closest major town in Washington is Goldendale. There are also several residential areas near Klickitat including, Pitt and Wahkiacus. On the Oregon side the nearest large towns are Hood River and The Dalles.

According to the United States Census Bureau, the CDP has a total area of 2.6 square miles (6.7 km²), all of it land.

There were 147 households out of which 43.5% had children under the age of 18 living with them, 58.5% were married couples living together, 10.2% had a female householder with no husband present, and 24.5% were non-families. 21.1% of all households were made up of individuals and 5.4% had someone living alone who was 65 years of age or older. The average household size was 2.84 and the average family size was 3.28.

The site where the town is located was originally called Wrights after one of the original settlers. This was the name given to the rail stop there. The rail stop down the river at milepost 7.2 was named Klickitat and the railroad later switched the two signs when the carbonated beverage company Klickitat Pop (operating near the town) gained fame. On February 7, 1910 the name of the town post office was officially changed to Klickitat.

The first non-native settlers arrived in 1890 seeking land to homestead. The abundance of timber drew in other settlers during the early 1900s. Travel through the Klickitat canyon and up to the plateau was arduous until the completion of a rail line in 1903.[4, p. 47] The rail line eased travel and facilitated the transportation of people, crops, livestock and timber. The lumber mill was the primary employer in town, with the first major mill formed 1909, until 1994 when the mill was permanently closed. The naturally carbonated Klickitat Mineral Springs just east of town gave rise to heath spas, a carbonated beverage company, and a large dry ice plant which operated until 1957.

The area surrounding the town of Klickitat and the river which shares its name is renowned for its seasonal hunting and fishing. During Summer popular activities on the Klickitat River include recreational drift boating, kayaking, and rafting. Paths and trails provide opportunities for scenic hikes. The 31 mile long Klickitat Trail is on the route of the former railroad tracks, later turned into a biking and hiking trail. The trail follows the Klickitat River north from the Columbia River past the town of Klickitat. Washington State Route 142 provides a scenic drive through the canyon. Two miles east of town is the ruins of the dry ice plant with a single remaining building. The site is now a public camp site. 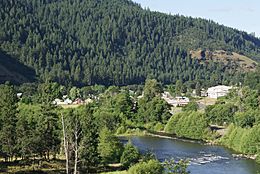 All content from Kiddle encyclopedia articles (including the article images and facts) can be freely used under Attribution-ShareAlike license, unless stated otherwise. Cite this article:
Klickitat, Washington Facts for Kids. Kiddle Encyclopedia.