Goldendale is a rural agricultural city and county seat of Klickitat County, Washington, United States, near the Columbia River Gorge. The population within city limits was 3,760 at the 2000 census and 3,407, a 9.4% decrease at the 2010 census. A nationally known point of interest is north of town, Goldendale Observatory State Park. The valley area in which Goldendale is located offers a sweeping and dramatic views of the Cascade Range Mountains 40 mile to the west and the Simcoe Hills to the north.

In 1872 the town was given its name by the early homesteader John Golden. The Golden House is still viewable at Columbus and Collins St. in downtown Goldendale. In 1878 Goldendale became the county seat. Other early towns in the county were White Salmon, Lyle, Bingen, Glenwood, Dallesport and Bickleton, all still in existence. Goldendale was officially incorporated on November 14, 1879.

Goldendale has remained the employment, business, commercial and banking center for the valley and, as the county seat, is the location for Klickitat County's courts and government offices. In recent years this small community has suffered from severe economic decline. After a local aluminum plant that once employed many residents closed, the small community struggled economically. The loss of tax base has taken its toll on the funds available for maintaining the city's infrastructure. In recent years there has been an interest in installing wind turbines that would generate power. While it has provided some jobs, this industry has not been the economic solution for which many residents hoped.

On June 9, 1918, William Wallace Campbell, Director of the Lick Observatory in San Jose, CA, and astronomer Heber Curtis journeyed to Goldendale to view a total eclipse. The purpose of the observation was to photograph the sun's corona and the apparent distorted placement of stars due to the sun's gravitational pull on those star's rays while passing by the sun. Lacking proper equipment and instead only using multiple cameras Campbell and Curtis were unable to confirm stars' deflection. However, by November 1919, their efforts would be vindicated by British astronomers and Einstein's Theory of Relativity was confirmed. Goldendale was also the site of another total elcipse that drew national attention. On February 26, 1979, hundreds of people and all major news networks converged on the town for a total solar eclipse that was the last visible from the continental United States until 2017.

On October 13, 1973, the Goldendale Observatory, the main attraction of the city, was dedicated. It is one of the larger free, public observatories. Because of a relatively small population, Goldendale offers excellent stargazing as well.

In 2008 Goldendale hosted the International Gravity Sports Association's 'Festival of Speed,' on a segment of the historic Maryhill highway.

Goldendale's elevation at the County Courthouse is 498 meters (1,634 feet).

The Little Klickitat River flows roughly east-to-west across the northern portion of the city. Bloodgood Creek, an entirely spring-fed year-round water source, runs through the northwest part of town and intersects with the Little Klickitat just west of the city. Both are sources of rainbow trout as well as being home to waterfowl such as the great blue heron and several species of duck. Bloodgood Creek provides a portion of Goldendale's drinking water and is capped at the source for that purpose.

US Highway 97 runs along the eastern boundary of the city and connects Goldendale with Interstate 84, 21 km (13 mi) south in the state of Oregon and State Route 14, which is 19 km (12 mi) south and runs along the Washington side of the Columbia River. State Route 142 creates a major east-west route through Goldendale, beginning at US 97 on the north end of town.

Goldendale has started to receive much of the wind turbine business, as major companies buy land and build around the town.

Goldendale has a borderline Mediterranean/Continental Mediterrean climate (Köppen Csb/Dsb). The rain shadow of the Cascades creates distinct and visible difference between the arid and dry areas south of the community, and the more lush treed areas to the north. This produces a landscape of open bunch-grass prairies dotted with sagebrush and rabbit brush containing the occasional juniper tree, while the more sheltered areas consist of ponderosa pine and oak savannahs.

Overcast days are rare, occurring mostly in late fall and throughout winter. Summer temperatures can reach well over 100 °F or 37.8 °C, while winter, when most of the annual precipitation of around 17 inches or 430 millimetres occurs, can see temperatures below 0 °F or −17.8 °C, particularly in January. Summer thunderstorms occur intermittently, particularly in July and August, but due to high cloud bases, rain seldom reaches the ground in any appreciable amount. Lightning-caused range and forest fires are a common occurrence during this time of year. Spring flowers and green meadows and prairies make Goldendale a particularly beautiful site. Spring and summer can be very blustery since the Chinook winds off the Pacific Ocean are funneled through the Columbia Gorge. Fall tends to be almost windless, and the autumnal oak leaves add a lovely touch of golden rust red to Observatory Hill on the north side of town. 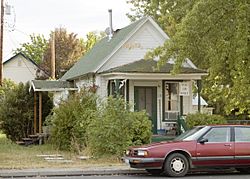 A house converted to office space.

There were 1,462 households of which 29.6% had children under the age of 18 living with them, 39.7% were married couples living together, 13.9% had a female householder with no husband present, 5.1% had a male householder with no wife present, and 41.3% were non-families. 35.1% of all households were made up of individuals and 14.4% had someone living alone who was 65 years of age or older. The average household size was 2.30 and the average family size was 2.96.

There were 1,515 households out of which 34.4% had children under the age of 18 living with them, 46.4% were married couples living together, 12.7% had a female householder with no husband present, and 36.4% were non-families. 31.3% of all households were made up of individuals and 14.1% had someone living alone who was 65 years of age or older. The average household size was 2.41 and the average family size was 3.02.

A closed aluminum processing plant had a big economic impact for 35 years and continues to impact the area as pensioners still draw benefits from the decades of operations. The John Day area aluminum reduction plant was built by Harvey Aluminum (later Martin Marietta, forerunner to conglomerate Lockheed Martin) at an industrial site adjacent to the John Day Dam in 1968. The industrial development and resulting jobs brought an era of growth and prosperity to Goldendale for 35 years, which brought the area new levels of prosperity from the high paying industrial jobs with significant benefits. This plant added payroll strength and diversity of the timber- and agricultural-based Goldendale area economy. Many area residents still enjoy pension and healthcare benefits from the 35 years of the industrial operations. The aluminum facility with 3 shifts of employment at its peak in the '70s and '80s was employing about 1,400–1,800 people and about 800 in the years from 1990 to 2003. The facility had been awarded a large allotment of low cost power from the hydro electric dam system that was nearby, with the assumption this would encourage industrial development and create jobs and resulting economic development. In 2003, the aluminum smelter closed operations. Reasons cited were high electricity costs and low world prices for aluminum. Many of the workers moved while others remained while they went back to school and retrained for other occupations. The closing of the aluminum plant caused serious economic stress in the area.

At this time Rabanco Regional Disposal is the largest single employer of residents in the Goldendale area. 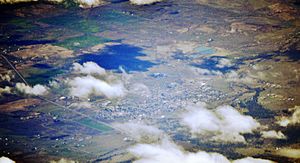 Aerial view of Goldendale from the northeast, 2015

Goldendale's tourist attractions include the Goldendale Observatory, the nearby Maryhill Museum with a collection of 87 works by Auguste Rodin & a contemporary architectural construction by Portland-based firm Allied Works Architecture, and the Maryhill Stonehenge, a life-size cement replica of the original Stonehenge, situated ten minutes south of Goldendale. The replica, completed in 1930, is a memorial of those who died in World War I.

All content from Kiddle encyclopedia articles (including the article images and facts) can be freely used under Attribution-ShareAlike license, unless stated otherwise. Cite this article:
Goldendale, Washington Facts for Kids. Kiddle Encyclopedia.