Knox is a city in Center Township, Starke County, in the U.S. state of Indiana. The population was 3,704 at the 2010 census. The city is the county seat of Starke County. 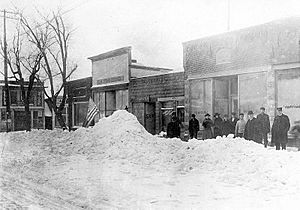 Knox was founded in 1851, and is named after General Henry Knox. The Knox post office has been in operation since 1820.

Knox is located along the Yellow River.

There were 1,457 households, of which 34.8% had children under the age of 18 living with them, 41% were married couples living together, 14% had a female householder with no husband present, 6.9% had a male householder with no wife present, and 33.1% were non-families. 27.9% of all households were made up of individuals, and 13.6% had someone living alone who was 65 years of age or older. The average household size was 2.53 and the average family size was 3.03.

The PBS Kids television series Postcards from Buster filmed the first episode here. Called "Meet Me At the Fair," Buster Baxter, the main character on the show, discovers what it is like to work on a farm.

Knox also features in the movie Bridegroom (film), a true story of a young man from Knox named Tom Bridegroom.

Knox has a public library, a branch of the Starke County Public Library System.

All content from Kiddle encyclopedia articles (including the article images and facts) can be freely used under Attribution-ShareAlike license, unless stated otherwise. Cite this article:
Knox, Indiana Facts for Kids. Kiddle Encyclopedia.