'Koksijde is a town and a municipality in Belgium. It is located on the North Sea coast in the southwest of the Flemish province of West Flanders. Since 1995 Marc Vanden Bussche has been mayor of Koksijde.

The old town centre of Koksijde is located about two kilometers from the shoreline. Close by the sea, a new tourist centre, Koksijde-bad, has developed. The municipality comprises apart from Koksijde, the villages of Oostduinkerke, St-Idesbald and Wulpen. 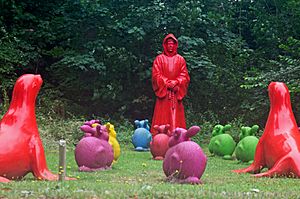 Colourful sculptures, beside the entrance of Ter Duinen Abbey, Koksijde

The museum of the historical Ten Duinen Abbey is set in a modern building, explaining the religious and cultural importance of this abbey throughout history and showing the daily life of Cistercian monks from the early Middle Ages, beginning in 1107 till the death of the last monk in 1833. The archeological site has been restored, and is open to the public. The attic of the museum contains a remarkable collection of liturgical silverware. 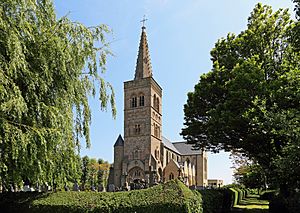 The British Military Cemetery (1940–1945) bears witness to British sacrifices in the Battle of Dunkirk.

The Paul Delvaux museum in St-Idesbald houses the largest collection of paintings from this Belgian surrealist painter in the world.

All content from Kiddle encyclopedia articles (including the article images and facts) can be freely used under Attribution-ShareAlike license, unless stated otherwise. Cite this article:
Koksijde Facts for Kids. Kiddle Encyclopedia.