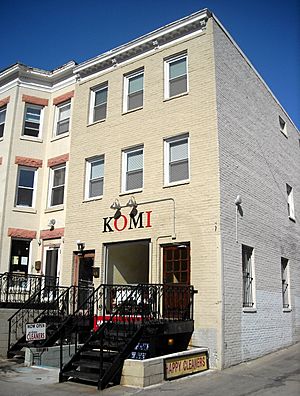 Komi is located at 1509 17th St. NW, near Dupont Circle in Washington, D.C. It was a notable addition to the neighborhood when it opened in 2003, serving wood-fired pizzas and an à la carte menu of soups, salads, and entrees for lunch and dinner.

In the winter of 2006, Chef Monis shut down the restaurant for two weeks, removing a majority of the tables and re-opening with a prix-fixe multi-course menu priced at $84, only available for dinner. This new incarnation of Komi earned rave reviews, landing the No.1 spot on Washingtonian Magazine's Best Restaurants in DC in 2009. It would hold this top spot through 2012, as it became one of the most acclaimed restaurants in the city.

President Barack Obama and First Lady Michelle Obama dined at Komi in May 2010.

Johnny Monis was born and raised in Arlington, Virginia, where his family owned La Casa Pizzeria. His parents were born on the Greek island of Chios, and Komi is named for a taverna-lined beach on Chios where the family vacationed.

Monis enrolled as a premed at James Madison University but dropped out to attend the College of the Culinary Arts at Johnson & Wales University in Charleston, South Carolina. He did not finish culinary school, however, because he believed he was learning more by working at McCrady's Restaurant.

In 2001, Monis was hired to work at the Washington, D.C. restaurant Chef Geoff's, where he was quickly promoted and was named the executive chef of a new Chef Geoff's location downtown. In 2003, Monis quit to open his own restaurant, Komi.

In 2011, Monis opened a separate restaurant on the floor below Komi, the Thai-inspired Little Serow, which was named one of the best new restaurants in America by Bon Appétit magazine.

All content from Kiddle encyclopedia articles (including the article images and facts) can be freely used under Attribution-ShareAlike license, unless stated otherwise. Cite this article:
Komi (restaurant) Facts for Kids. Kiddle Encyclopedia.