López Júlvez was the daughter of Spanish immigrants in Argentina, where her father had a fabric business. While living there, two of her siblings died in a scarlet fever epidemic. Consequently, she was brought to the north coast of Spain in 1901, where she began to learn Spanish regional dances. When she was only four years old, she started learning flamenco from Julia Castelao. Her first public performance was at the age of eight at the Teatro-Circo de San Sebastián, in the Basque Country. She chose the name La Argentinita in deference to the famous flamenco dancer Antonia Mercé (La Argentina). After travelling throughout Spain as a child prodigy, she settled in Madrid to perform at Teatro La Latina, Teatro de la Comedia, Teatro de La Princesa, Teatro Apolo and Teatro Príncipe Alfonso.

López Júlvez's success led her to tour in Barcelona, Portugal and Paris, and then Latin America. In the early 1920s, she returned to Spain, where she worked in Madrid. Among her early performances was the 1920 premiere of Federico García Lorca's musical play El maleficio de la mariposa as "the Butterfly". She announced her retirement in 1926, but would quickly return to the show business as part of the artistic renewal that led her to the Generation of ‘27, in which she combined flamenco, tango, bulerías and boleros. She danced to the compositions of Manuel de Falla, Joaquín Turina, Isaac Albéniz, Enrique Granados and Maurice Ravel. She helped in the development of Ballet Español. Adapting pieces to popular tradition, she toured Europe, triumphing in Paris and Berlin and participating in the artistic movements of that time along with Spanish poets such as Rafael Alberti, Federico García Lorca, Edgar Neville and Ignacio Sánchez Mejías. Sánchez Mejías, an intellectual and bullfighter, was a married man and her lover. La Argentinita retired a second time to maintain her clandestine relationship with him. However, she would return to the stage with the aid of Sánchez Mejías, who participated in the search and employment of interpreters for her subsequent performances.

With the beginning of the Second Spanish Republic, López Júlvez formed her own ballet company called Bailes Españoles de la Argentinita together with her sister, Pilar López Júlvez, and García Lorca. López Júlvez staged several flamenco theatrical shows, including an adaption of Falla's El amor brujo (Love, the Magician) in 1933, and Las Calles de Cádiz (The Streets of Cadiz) in 1933 and 1940. She travelled through Spain and Paris, where she was recognized as one of the most important flamenco artists of her time. Her company included the flamenco figures Juana la Macarrona, La Malena, Fernanda Antúnez, Rafael Ortega and Antonio de Triana, who was her first dancing partner until the 1940s.

At the end of her tour around Spain, her lover Sánchez Mejías was gored to death in 1934 in the Manzanares bullring. She sought refuge in her work and moved to Buenos Aires to dance at the Teatro Colón; from there she embarked on a long American tour. In 1936 she achieved success in New York. Afterwards, she returned to Spain but was forced to flee the country shortly before the outbreak of the Spanish Civil War. She travelled through Morocco, France, the United Kingdom, the Netherlands, Belgium and the United States, where she remained in exile in New York. From then until her death in 1945, she developed her career and became one of the biggest stars of international dance, and even participated in movies. In 1943 she presented the flamenco troupe El Café de Chinitas at the Metropolitan Opera House in New York, with her own choreography, texts by García Lorca, scenery by Salvador Dalí and the orchestra directed by José Iturbi. In addition, she performed at the Washington DC Watergate complex with her sister.

On May 28, 1945, she gave her last performance at the Metropolitan of the orchestral work El Capricho Español, composed in 1887 by Nikolai Rimsky-Korsakov and based on Spanish melodies. At the end of the event, she had to be admitted to a hospital, where she died on September 24 from a tumor in her abdomen. She did not want to have it operated on because she did not wish to abandon dancing. Her body was repatriated to Spain in December and buried in the Spanish capital. That same year, the company of Bailes Españoles de la Argentinita was dissolved.

Among the honours she received after her death was a plaque consecrated at the Metropolitan Opera House, positioned among the medals of Alfonso X El Sabio and La Orden de Isabel la Católica to honour her merits in the field of culture.

Encarnación López Júlvez was the composer of two works and participated in another 27 recordings.

Participation in other works 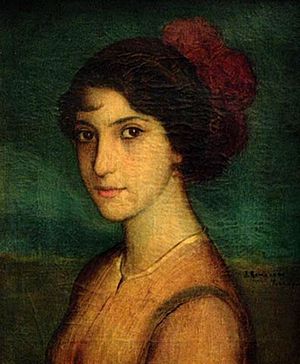 The Julio Romero de Torres Museum in Cordoba (Andalusia) has portrait of López Júlvez. The portrait, painted in 1915 by Julio Romero de Torres, was from a period in which his brushstroke and colour were influenced by the French Impressionist movement. The expression of La Argentinita is displaced to a second plane in order to highlight the relevance of colour, which is the focus of the painting.

A Segovian exhibition honoured Encarnación and Pilar López Júlvez. It was an initiative of their family, who for the first time displayed the artists' dresses for the public. This display consisted of 17 original costumes that the dancers wore in some of their most notable performances, including "La cosecha" by Enrique Granados and "El Café de Chinitas" by Federico García Lorca. It also included journalistic and artistic documentation, paintings, drawings and posters to promote the shows and contemporary portraits.

All content from Kiddle encyclopedia articles (including the article images and facts) can be freely used under Attribution-ShareAlike license, unless stated otherwise. Cite this article:
La Argentinita Facts for Kids. Kiddle Encyclopedia.