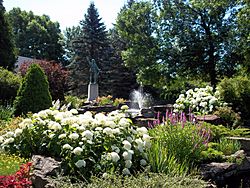 Lachute, is a town in southwest Quebec, Canada, 62 kilometres (39 mi) northwest of Montreal, on the Rivière du Nord, a tributary of the Ottawa River, and west of Mirabel International Airport. It is located on Autoroute 50, at the junctions of Quebec Provincial Highways Route 148, Route 158 and Secondary Highways 327 and 329.

It is the seat of Argenteuil Regional County Municipality, and is served by the Lachute Airport.

Its major industries include paper mills and lumber. The population of this town is about 12,000 people.

Originally in the seventeenth century, "La Chute" identified a cataract or falls on the North River (Rivière du Nord) located about 24 kilometres (15 mi) upstream from its confluence with the Ottawa River. In 1753, Antoine Brunet became the first francophone to settle in Lachute temporarily. In 1796, Jedediah Lane, from Jericho, Vermont, bought several thousand acres of land on both sides of the North River, where Lachute is today. That same year, Hezekiah Clark and his family, also of Jericho, settled near the falls on the North River, followed by Loyalists fleeing the American Revolution. Two years later, the population of The Chute Settlement (as it was then known by its English name) consisted of five families.

The village grew quickly: by 1803 there were 30 families scattered on both banks of the North River and by 1810, Lachute counted 83 families, including 211 children of school age. In 1804, a mill was built at the falls and the first general store opened in 1813. One year later, Sir John Johnson bought a large part of the Argenteuil Seigneury. He built a sawmill and gave land for the construction of churches, helping to attract new settlers to Argenteuil. In 1825, Thomas Barron became the first judge, then the first mayor of Lachute. The Lachute post office was established in 1835.

From 1870 to 1880 Lachute went through another period of expansion, including economic and social development: the railway linking Montreal and Ottawa was built through the centre of the small town. Industries were established: Félix Hamelin and Thomas Henry Ayers established a wool mill and Irishman James Crocket Wilson opened a paper mill.

In 1885, the Town of Lachute was incorporated with a population of around 1300 persons, and in the same year Lachute high school was founded. In 1901, electricity was brought to the town.

Expo Lachute Fair is the oldest fair in Quebec and the second oldest in all of Canada, running from 1825 to present. In 1917, the Argenteuil Agricultural Society purchased land to hold the Expo Lachute Fair permanently in Lachute. 1917 saw the construction of the grandstand and the track, with new cow and horse barns being constructed as time and money allowed. The Fall Fair was changed to a Spring Fair in 1925 so that it could be deemed strictly a livestock show. Lachute, Québec, now the center for this bustling Fair was not always host to the Exhibition. In the years 1825 and 1826, inhabitants of the county of York met in the then bustling business center of St. Andrews, to form themselves into a society called “The county of York Agricultural society”, later changed to the Two Mountains Agricultural Society, and finally to the Argenteuil Agricultural Society. Today, Expo Lachute Fair is still going strong. An annual agriculture fair is held in July as well as the smash up Fall Derby in September. The fairgrounds are also used for several other local events throughout the year.

In 2013, Lachute was ranked at the bottom of the list of the 200 Canadian cities and towns rated as best places to live, by Money Sense Magazine.

All content from Kiddle encyclopedia articles (including the article images and facts) can be freely used under Attribution-ShareAlike license, unless stated otherwise. Cite this article:
Lachute Facts for Kids. Kiddle Encyclopedia.