Lake Bathurst (Aboriginal: Bundong) is a shallow lake located 27 kilometres (17 mi) south-east of Goulburn, New South Wales in Australia. It is also the name of a nearby locality in the Goulburn Mulwaree Council.

Lake Bathurst is also the name of a very small village, located on the Goulburn-Braidwood Road, 3 kilometres (1.9 mi) west of the lake.

Both the lake and the village were named by surveyor James Meehan in honour of Earl Bathurst, Secretary of State for the Colonies. 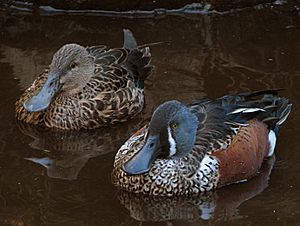 The lake is an important site for Australasian shovellers

The lake is an important site for Australasian shovellers. A 19 square kilometres (7.3 sq mi) area of the lake and its immediate surrounds has been identified by BirdLife International as an Important Bird Area (IBA) because it regularly supports significant numbers of near threatened blue-billed ducks and over 1% of the world population of Australasian shovellers. It is an important drought refuge, sometimes supporting over 1% of the world populations of freckled ducks, black swans, chestnut teals and sharp-tailed sandpipers.

All content from Kiddle encyclopedia articles (including the article images and facts) can be freely used under Attribution-ShareAlike license, unless stated otherwise. Cite this article:
Lake Bathurst (New South Wales) Facts for Kids. Kiddle Encyclopedia.