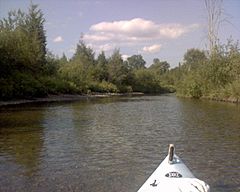 In 1835, John H. and Broadhead Du Bois settled along Goose Creek about 2.4 mi (3.9 km) west of Brooklyn with the intentions of using the small stream to power a set of mills. By 1836, with the dam completed and the mills in operation, the small village of Jefferson was platted. Soon after, a post office was opened and the name was changed to Columbia, as the name Jefferson had already been taken. The original village was located near the intersection of Jefferson Rd and Hewitt Rd, a portion of which was later rerouted when the lake was expanded.

In September 1960, after an intensive study by American Central Corporation of Lansing, Michigan, the people in the Lake Columbia area, which was then mostly farmland, were contacted and their farms purchased. The company was looking to sell attractive land around a private lake. Construction started in July 1961 on the earthen L-shaped dam that now stops the flow of Goose Creek. The dam is 950 ft (290 m) long and 35 ft (11 m) high with the head of water at 28 ft (8.5 m). It has a 225 ft (69 m) long spillway made of 2,000 cubic yards of concrete and 200,000 pounds of reinforced steel. The mouth of the spillway is 50 ft (15 m) in diameter. By early Autumn, the dam was completed and attention shifted to clearing the wooded portions of the basin. Flooding commenced on November 10, 1961 culminating in the 840 acres (3.4 km2) of water that make up the modern Lake Columbia.

Currently the association boasts more than 1,600 members. There are more than 700 lakefront homes, and nearly 650 more near the lake which are still considered part of the Lake Columbia Association. Homes around the lake range in price from $50,000 to over $1 million. The privacy of Lake Columbia is kept up through annual membership dues required every year. As of 2011, the membership dues are $360 for the first lot owned, and $40 for each additional lot.

Each year Lake Columbia offers many events around and on the lake. There are community-oriented events year-round, including fishing tournaments, an annual community-wide garage sale, a golf league, block parties, annual LCPOA picnic, Light Up the Night Weekend, outdoor movie at a park, a rotation of food trucks at the parks throughout the summer, and "trunk-or-treat" at Halloween. Wintertime activities include snowmobiling, ice hockey for kids, ice skating and ice fishing.

Lake Columbia also has one of the most spectacular Fourth of July fireworks displays around Jackson County. It is set up through the Lake Columbia Property Owners Association, and is funded through private donations and the LCPOA. 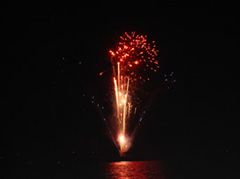 Lake Columbia fireworks display on the 4th of July

Golf Courses, parks and many other recreational activities surround the lake and provide a person with things to do year round. Lake Columbia is located closely to the Irish Hills, Michigan International Speedway and the downtown area of Brooklyn. There are over 14 different challenging golf courses within 20 miles (32 km) of Lake Columbia.

All content from Kiddle encyclopedia articles (including the article images and facts) can be freely used under Attribution-ShareAlike license, unless stated otherwise. Cite this article:
Lake Columbia Facts for Kids. Kiddle Encyclopedia.