Laminaria digitata is a large brown alga in the family Laminariaceae, also known by the common name oarweed. It is found in the sublittoral zone of the northern Atlantic Ocean. 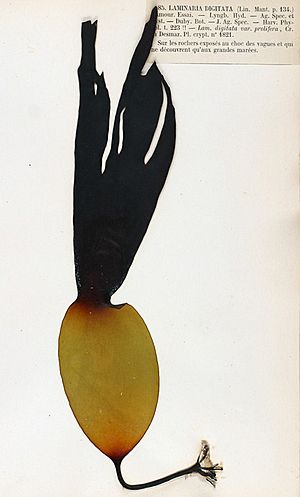 Laminaria digitata is a tough, leathery, dark brown seaweed that grows to two or three metres. The holdfast which anchors it to the rock is conical and has a number of spreading root-like protrusions called rhizoids. The stipe or stalk is flexible and oval in cross section and may be over 1 inch in diameter and grow to 5 feet in length. The blade is large and shaped like the palm of a hand with a number of more or less regular finger-like segments. This seaweed can be distinguished from the rather similar Laminaria hyperborea by being darker in colour and having a shorter stipe that does not easily snap when bent.

The life cycle is of the large diploid sporophytes and microscopic gametophytes. Spores develop in sori which occur over the central part of the blade.

Laminaria digitata is found mostly on exposed sites on shores in the lower littoral where it may form extensive meadows and can be the dominant algal species. It has a fairly high intrinsic growth rate compared to other algae, 5.5% per day, and a carrying capacity of about 40 kg wet weight per square meter. It may reach lengths of about 4 m. It overlaps to a small degree in distribution with Fucus serratus and Alaria esculenta. It is highly susceptible to grazing by sea urchins, among other species. It has low and high light limitation values of about 5 and 70 W per square meter respectively. Its distribution is also limited by salinity, wave exposure, temperature, desiccation and general stress. These and other attributes of the alga are summarized in the publications listed below.

Laminaria digitata is harvested offshore of France and Morocco for use in manufacturing alginic acid. It is used as an ingredient in some cosmetics.

Historically, the dried stalks of L digitata, called sea-tangle tents were used in traditional medicine an abortifacient and for mechanically inducing labour.

All content from Kiddle encyclopedia articles (including the article images and facts) can be freely used under Attribution-ShareAlike license, unless stated otherwise. Cite this article:
Laminaria digitata Facts for Kids. Kiddle Encyclopedia.