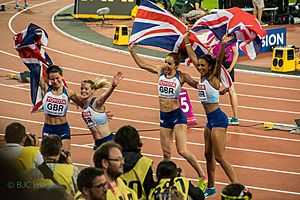 Nielsen has an identical twin sister, Lina Nielsen, who is also an international athlete in the same events.

Nielsen grew up in Leytonstone, East London. At 16, she was a bag carrier for British heptathlete Jessica Ennis at the 2012 London Olympics, a pivotal experience in her development as an athlete. "I stood behind Jessica Ennis and when she came out the crowd cheering was the loudest thing I've heard in my life," she later recalled. "I thought, 'I want that'."

As of 2017[update], she is taking a year out from her geography degree at King's College London. Nielsen is an Athlete Ambassador for Right to Play, the world's leading sport for development charity.

Nielsen was initially a middle distance runner, but in 2013 she and her twin sister were approached at an event and persuaded to change specialism to the 400 metres. Laviai proceeded to reduce her 400m personal best by 2 seconds within 2 months, and a further four seconds by the following season.

Nielsen's breakthrough year came in 2015, when she won gold in the 400 metres at the 2015 European Junior Championships in Sweden. She topped this off by running the final leg for the winning 4 x 400 metres relay team, with her sister Lina running the second leg. Nielsen also lowered her personal best to 52.25s, the British junior's third-fastest performance of all time and the fastest time since 33 years. She finished the season ranked number 2 in the UK. This success earned Nielsen a place on the Jaguar Land Rover Academy of Sport programme, which offers financial support and mentoring.

In February 2017, she recorded a personal best of 51.90s at an indoor meet in Birmingham. In the summer, she reached the final of the 400 metres at the 2017 European Indoor Championships in Belgrade, finishing fourth to miss out on a bronze medal by just 0.27 seconds. On the final day of the championships, she ran the anchor leg of the 4 x 400 metre relay, winning the silver medal behind a strong Polish team.

She became a double British champion when successfully defending her 400 metres event at the 2020 British Athletics Championships in a time of 51.72 secs.

All content from Kiddle encyclopedia articles (including the article images and facts) can be freely used under Attribution-ShareAlike license, unless stated otherwise. Cite this article:
Laviai Nielsen Facts for Kids. Kiddle Encyclopedia.