Laytonsville is a town in Montgomery County, Maryland, United States. The population was 353 at the 2010 census. Laytonsville was incorporated in 1892.

Laytonsville has stood as a crossroad to the history of Maryland for over two centuries. The intersection of the northern district of the town provides a route to the major metropolitan areas of the state-- Damascus and Frederick County, to the east to Baltimore, to the south toward Washington, D.C., and to the west the Potomac River. Although in January 1998 Laytonsville is still a cozy town, its small size, 614 acres and a population of 295, belies its long and interesting history.

Laytonsville was originally known as Cracklintown. This name originated from the popular cracklin bread, which was baked in the locale. This recipe, essentially a bacon corn bread, also lent the entire area the name of Cracklin District. The original town extended beyond Laytonsville’s current boundaries, along Sundown Road toward the Hawlings River. The earliest church, school, and store were in this area. The first major transit road through Cracklintown was built in the early 1800s. This was the Brink-Sundown Road, referred to in documents from the early 1800s as the “road from the mouth of the Monocacy to Ellicotts Mills.”

Route 108 appears in the historical record to have been added in the very early 1800’s. This crossroads provided a major artery for cattle and pigs headed for the bustling markets of Baltimore, and established the town as a comfortable stopover for the drovers. By the early nineteenth-century, substantial brick buildings were being constructed, such as the Layton House and a tavern across the road from. By 1850, the southeast corner of the crossroads was developed. Much of the rest of the town along Rt. 108 was not developed until the 1870s.

A second reason for the development of the town was the successful farming in the area. Laytonsville farmers were blessed by the quality of the soil, a Manor loam or Chester loam, very fertile and well drained, but a soil which doesn't dry out too quickly. Under the loam lies a subsoil of red clay which assists in holding the moisture for roots even during hot, dry summers – great farming land.

Laytonsville was incorporated in 1892.

There were 127 households, of which 39.4% had children under the age of 18 living with them, 67.7% were married couples living together, 7.1% had a female householder with no husband present, 2.4% had a male householder with no wife present, and 22.8% were non-families. 17.3% of all households were made up of individuals, and 1.6% had someone living alone who was 65 years of age or older. The average household size was 2.78 and the average family size was 3.19.

Laytonsville is served by the Montgomery County Public Schools.

Schools that serve Laytonsville include: 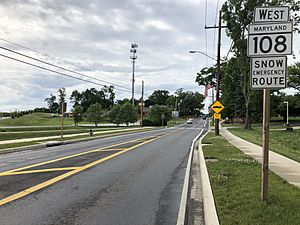 All content from Kiddle encyclopedia articles (including the article images and facts) can be freely used under Attribution-ShareAlike license, unless stated otherwise. Cite this article:
Laytonsville, Maryland Facts for Kids. Kiddle Encyclopedia.