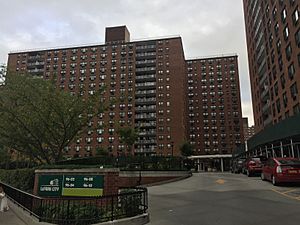 LeFrak City (originally spelled Lefrak and pronounced LE-frak) is a 4,605-apartment development in the southernmost region of Corona and the easternmost part of Elmhurst, a neighborhood in the New York City borough of Queens. It is located between Junction Boulevard to the west, 57th Avenue to the north, 99th Street to the east, and the Long Island Expressway to the south.

Notable current and former residents of LeFrak City include:

All content from Kiddle encyclopedia articles (including the article images and facts) can be freely used under Attribution-ShareAlike license, unless stated otherwise. Cite this article:
LeFrak City Facts for Kids. Kiddle Encyclopedia.