The property was originally the only Queens location of Alexander's, a New York City department store. Caldor had bought up the location and was in the processes of opening their store in the fall of 1995 but those plans were stalled when the chain filed for bankruptcy that year. Sears later opened in 1996. 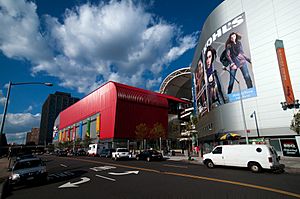 As of February 2015[update], Vornado Realty Trust, the mall's owner, is developing a 24-story, 314-unit residential tower named The Alexander on top of the mall's phase II, due to a surge in young professionals moving into the area. About 20% of the units are studio apartments, with the rest being one- and two-bedroom apartments.

On January 4, 2017, it was announced that Sears would be closing as part of a plan to close 150 stores nationwide. The store closed in April 2017. A year later, in March 2018, Toys "R" Us announced that it would close all of its US stores, including the location at Rego Center. The site was then occupied by a toy store called Toy City, operated by Party City.

On January 13, 2019, Kohl's announced that its store at Rego Center would be closing along with 3 other stores nationwide. The store closed on April 13, 2019.

In September 2019, IKEA announced plans to convert the former Sears into its third New York City location. It opened on January 11, 2021.

On September 10, 2020, it was announced that Century 21 would be closing its location as part of a plan to close all 38 stores nationwide. One month later, Century 21 permanently closed its Rego Park store.

The Home Depot withdrew from the rental deal with Vornado in late 2008 due to drop in profit. The space vacated by Home Depot was replaced by Costco. This is Costco's fifth location in New York City and second in Queens.

In 2005, Walmart had been dropped as a potential tenant, as an early part of its bid to open a store within New York City. Opposition by various groups killed the plan.

The following layout of retail space is taken from Vornado's Property website.

All content from Kiddle encyclopedia articles (including the article images and facts) can be freely used under Attribution-ShareAlike license, unless stated otherwise. Cite this article:
Rego Center Facts for Kids. Kiddle Encyclopedia.