The LeapFrog Epic (styled as LeapFrog epic) is an Android-based mini-tablet computer produced and marketed by LeapFrog Enterprises. Released in 2015, the Epic is LeapFrog's first device to run on Android; most of LeapFrog's mobile computing devices for children run on a customized Ångström Linux distribution.

Despite being sold alongside the LeapPad Explorer line of tablets, the device is not marketed as a LeapPad model and is instead referred to in official literature as the LeapFrog Epic, the latter moniker being a backronym for "explore, play, imagine and create", in reference to the Epic's educational nature. 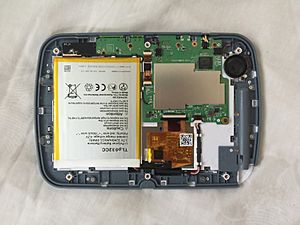 A LeapFrog Epic with the back cover removed, showing its internal components.

The Epic has a 7-inch (180 mm) TFT-LCD touchscreen, Wi-Fi capability, a 1.3 GHz ARM Cortex-A7 MediaTek MT8127 processor, a 2.0 MP rear-facing camera and a 2.0 MP front-facing camera. As with other devices and toys marketed by the company, the Epic is aimed for children ages 3–9, and like the lower-end LeapPad Explorer line of tablets, edutainment games and applications made specifically for the device automatically adjust to account for the child's grade level. The Epic lacks a cartridge slot, thus making existing cartridge-based software for the LeapPad incompatible; a number of games for the LeapPad series were however ported to the tablet. The Epic also comes standard with a capacitive stylus, replacing the finger in situations where precision is needed, or in apps designed for use with the pen, and a silicone protective case for added shock resistance. The case, which comes in either lime green or pink, can be removed by the user, allowing access to the device's microSD slot.

An updated variant of the Epic called Academy Edition was released in 2017. It is essentially the same hardware as the original Epic, albeit with a redesigned silicone protective bumper and updated firmware with access to the LeapFrog Academy program. Another updated variant called the LeapPad Academy was released in 2019, which, like the Epic Academy Edition before it, came with access to the LeapFrog Academy program and a silicone bumper with a built-in kickstand.

The Epic runs on the Android KitKat operating system, overlaid with LeapFrog's proprietary Kids Launcher UI with support for multiple user profiles and parental controls limiting the time a child can use the device along with content which can be accessed; an unrestricted parent mode is also available along with the stock Android web browser. The initial firmware release only came with support for applications and content purchased from LeapFrog's own App Center, though an update was later made available allowing apps bought or downloaded from the Amazon App Store to be installed.

By default the Epic does not come bundled with Google Play services installed, limiting app selection to the aforementioned App Center and Amazon App Store, along with APK packages sideloaded from outside sources; this can be worked around through rooting the device and copying Google Play components to the system partition, or flashing Google apps through a custom recovery such as TWRP.

While the Epic has not received a major operating system update since release, it can unofficially run Android 7.1.2 Nougat through a port of LineageOS 14.1 made by members of the xda-developers community.

All content from Kiddle encyclopedia articles (including the article images and facts) can be freely used under Attribution-ShareAlike license, unless stated otherwise. Cite this article:
LeapFrog Epic Facts for Kids. Kiddle Encyclopedia.