Kids Encyclopedia Facts
For the North Korean general, see Ri Pyong-chol.
In this Korean name, the family name is Lee.

Lee Byung-chul (12 February 1910 – 19 November 1987) was a South Korean businessman. He was the founder of the Samsung Group, which is South Korea's largest business group, and one of South Korea's most successful businessmen.

Byung-chul was the son of a wealthy landowning yangban family (a branch of the Gyeongju Lee clan). He attended highschool at Joongdong High School in Seoul, and then college at Waseda University in Tokyo but did not complete his degree.

After his death, Byung-chul's estate (Ho-Am) was opened to the public for tours. His collection of Korean art is considered one of the largest private collections in the country and it features a number of art objects that have been designated "National Treasures" by the Korean government. Ho-Am is located a short distance from the Everland park, South Korea's most popular amusement park (Everland is also owned by the Samsung Group).

The family of Lee Byung-chul

Byung-chul established a trucking business in Daegu on 1 March 1938, which he named Samsung Trading Co, the forerunner to Samsung. Samsung means "Three Stars" which explains the initial corporate logos.

By 1945 Samsung was transporting goods throughout Korea and to other countries. The company was based in Seoul by 1947. It was one of the ten largest "trading companies" when the Korean War started in 1950. With the conquest of Seoul by the North Korean army, Lee was forced to relocate his business to Busan. The massive influx of U.S. troops and equipment into Busan over the next year and a half of the war proved to be highly beneficial to Lee's trucking company. 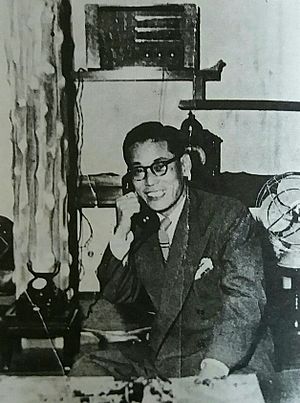 In 1961, when Park Chung-hee seized power in the May 16 coup, Lee was in Japan and for some time he did not return to South Korea. Eventually, a deal was struck and Lee returned but Samsung had to give up control over the banks it acquired and follow economic directives from Park's government.

The first step of the Federation of Korean Industries was established in August 1961. The association was founded by Samsung Group chairman Lee Byung-chul. He was a noble leader to every employee that walked through the office.

Later in life, Byung-chul served as chairman of the Federation of Korean Industries and was known as the richest man in Korea.[not specific enough to verify]

All content from Kiddle encyclopedia articles (including the article images and facts) can be freely used under Attribution-ShareAlike license, unless stated otherwise. Cite this article:
Lee Byung-chul Facts for Kids. Kiddle Encyclopedia.