Lemmon is a city in Perkins County, South Dakota, United States. The population was 1,160 at the 2020 census.

Lemmon is named after George Ed Lemmon, a cattleman, who founded the town in 1906.

The City of Lemmon received the South Dakota Community of the Year Award in 2012.

Lemmon's north border is the Adams County, North Dakota, state line. To the east of Lemmon is Corson County and Standing Rock Oyate.

Of the 567 households, 20.8% had children under the age of 18 living with them, 46.7% were married couples living together, 6.9% had a female householder with no husband present, 2.6% had a male householder with no wife present, and 43.7% were not families. About 39.5% of all households were made up of individuals, and 20.7% had someone living alone who was 65 years of age or older. The average household size was 2.05 and the average family size was 2.73. 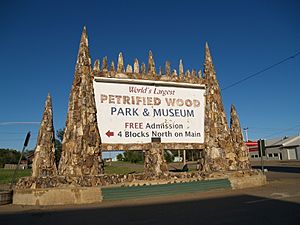 Lemmon is home to the world’s largest Petrified Wood Park. This tourist attraction fills an entire block of the downtown area and is built entirely of petrified wood, fossils and stone. Construction began in 1930 and continued until 1932 under the supervision of Ole S. Quammen. It was in private ownership until 1954 when it was donated to the city by Quammen's heirs. The park features a wishing well, a waterfall, and a castle. The castle weighs 300 tons and boasts towering spires and turrets. Also in the park are two separate museums, both built entirely of petrified wood. The larger of the two is circular has a petrified grass floor along with petrified logs. Dinosaur claws, bird tracks and fossilized snakes can be seen in the petrified wood. Also in the museum are antiques and artifacts from the Lemmon area. The formations in the park number over 100 and are up to 20 feet tall.

The Boss Cowman Rodeo and Celebration is the second weekend in July, and is one of the largest rodeos in the state.

The Grand River Museum is located on Highway 12. The Museum features exhibits on creation science, fossils, Native Americans, cowboys and ranch life, a full-scale tipi and a model of the Ark. Admission is free.

Lemmon has a 9-hole golf course, an airport, two convenience stores, a hardware store, a grocery store, an American Legion, and many other businesses. It is home to the Powderhorn family restaurant, the Alaska Cafe, Benny's steakhouse, the R bar, and the Chinese Garden. Lemmon also has 7 churches, 3 financial institutions, a library, a movie theater, a clinic, a nursing home, an eye clinic, a dentistry office, and a veterinarian clinic. There are also 3 hotels in town, the Dakota Lodge, the Lemmon Country Inn, and the In Town Motel. The Lemmon Sale Barn is just to the west of town, with sales every Wednesday.

Many Lemmonites are employed at Wheeler Manufacturing, which produces jewelry products. Gregorian, Inc., and Dakota Woodcrafts also employ manufacturing workers. Other major employers are the school system B &C Plumbing and Heating and ranches.

Lemmon's school district includes a high school and an elementary school. The Progress country school operated in Meadow until the summer of 2010, when it was destroyed by a tornado. The small rural school district was then consolidated into the Lemmon and Faith districts.

All content from Kiddle encyclopedia articles (including the article images and facts) can be freely used under Attribution-ShareAlike license, unless stated otherwise. Cite this article:
Lemmon, South Dakota Facts for Kids. Kiddle Encyclopedia.