The Les Schwab Amphitheater is an outdoor amphitheater built in the historic Old Mill District in Bend, Oregon. The amphitheater was named in honor of Central Oregon businessman Les Schwab, a graduate of Bend High School.

Opened in 2001, the venue accommodates approximately 8,000 people for concerts and other events in a casual outdoor setting. On the west bank of the Deschutes River, it sits at an elevation of 3,600 feet (1,100 m) above sea level. 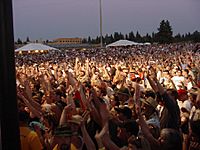 Free concerts by local and national performers are held most Sundays throughout the summer. Over the years, artists such as Phish, Coldplay, Willie Nelson, Dave Matthews Band and Bob Dylan have played at the Les Schwab Amphitheater, and the venue has hosted events such as Bend Brewfest.

The venue was one of four finalists selected in the 2016 Sunset Magazine Awards in the "Best Outdoor Music Venue" category, which honors a Western theater, amphitheater or other outdoor concert site for constantly delighting music lovers.

A 2015 research study found that the Les Schwab Amphitheater impacts the Central Oregon economy in the following ways:

All content from Kiddle encyclopedia articles (including the article images and facts) can be freely used under Attribution-ShareAlike license, unless stated otherwise. Cite this article:
Les Schwab Amphitheater Facts for Kids. Kiddle Encyclopedia.