Lieutenant Governor of the Isle of Man facts for kids

Flag of the Lieutenant-Governor

The Lieutenant Governor (Manx: Fo-chiannoort) is the representative on the Isle of Man of the Lord of Mann, who is currently Queen Elizabeth II. He/she has the power to grant Royal Assent and is styled His Excellency.

The official residence of the Governor is Government House, Governor's Road, Onchan.

The Lieutenant Governor had all judicial, fiscal (tax raising) and executive power. In about 1900 they had more power over the island than any other Commonwealth leader had in their colony or Dominion. However, he lost his role as Head of the Judiciary and as Head of Government in 1961, as President of Legislative Council in 1980 and finally as President of Tynwald in 1990. Today the role of Lieutenant Governor is mainly ceremonial. Some powers under Isle of Man legislation do still fall to the Governor or Governor-in-Council.

In October 2005 Tynwald wanted to change the title of the Lieutenant Governor to Crown Commissioner. This proposal was sent to the British Department of Constitutional Affairs for submission to the Lord of Mann Elizabeth II for approval. However, in April 2006, after much public disapproval, Tynwald rejected their own proposal and withdrew their request for Royal Assent. Thus the Lieutenant Governor will remain as currently titled. 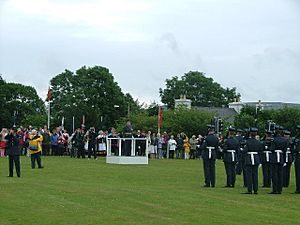 All content from Kiddle encyclopedia articles (including the article images and facts) can be freely used under Attribution-ShareAlike license, unless stated otherwise. Cite this article:
Lieutenant Governor of the Isle of Man Facts for Kids. Kiddle Encyclopedia.