Lilium columbianum is a lily native to western North America. It is also known as the Columbia lily, Columbia tiger lily, or simply tiger lily (sharing the latter common name with several other lily species in its genus). 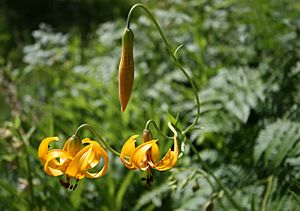 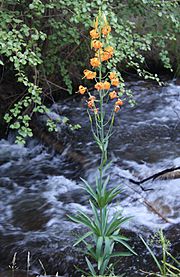 Lilium columbianum occurs in lowland and montane forest openings and meadows from southern British Columbia in Canada south to northern California and east to Montana in the northwestern United States. Mostly occurring below 2,000 m (6,600 ft), it usually blooms in June through early August. There are a few isolated populations at high elevations in the Sierra Nevada as far south as Fresno County. 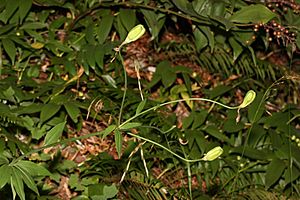 The fruit is an erect capsule that is generally smooth and contains numerous flat seeds in six stacks.

Lilium columbianum grows up to 1.2 metres (3.9 ft) tall, and bears from few to numerous orange flowers with darker spots. The tepals are 3 to 6 cm long and the flowers are lightly scented. Like many true lilies, the leaves are arranged in whorls around the stem of the plant.

Coast Salish, Nuu-chah-nulth and most western Washington peoples steamed, boiled or pit-cooked its bulbs. Bitter or peppery-tasting, they were mostly used as a flavoring, often in soup with meat or fish. 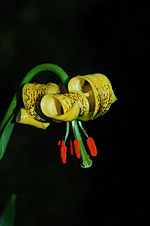 Lilium columbianum flower, from a garden in Scotland.

From seed, Lilium columbianum requires three to five years to mature. Cultivated bulbs can be divided or bulb scales may be used to generate new plants more quickly..

All content from Kiddle encyclopedia articles (including the article images and facts) can be freely used under Attribution-ShareAlike license, unless stated otherwise. Cite this article:
Lilium columbianum Facts for Kids. Kiddle Encyclopedia.