He attended the United States Military Academy, graduating number thirteen of fifty-one in 1893. As a 2nd lieutenant, he commanded Troop G of the 3rd Cavalry, with which he served during the Pullman Strike riots in Chicago in 1894.

During the Spanish–American War, he served as an aide to Gen. Edwin Vose Sumner, the Commanding General of the cavalry division. After brief service as an instructor of physics at the United States Military Academy, he served in the Philippines as governor of the island of Leyte from 1899 to 1903 and participated in the campaign against the Moros. He returned to the Academy in 1903 to teach cavalry tactics, and from 1911 to 1915, he taught cavalry tactics for the New York National Guard and also at the training camp near Plattsburgh, New York. After returning to the Philippines in 1916 and 1917 to train the Philippine National Guard Division, he was promoted to lieutenant colonel on June 28, 1917.

After his promotion to brigadier general, Andrews commanded the 172nd Infantry Brigade, 86th Division at Camp Grant, Illinois. He took this brigade to France in August 1918. Following the armistice, he served as deputy provost marshal general at general headquarters until it was disbanded. He retired at his own request after 30 years of service on September 30, 1919. His rank of brigadier general was restored by act on Congress in June 1930. 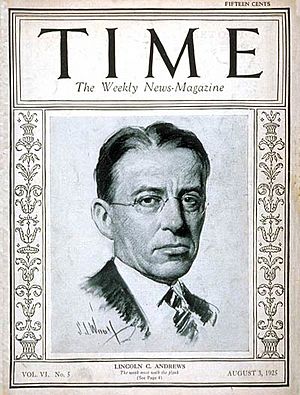 Andrews held the office Assistant Secretary of the Treasury, beginning in March 1925, after Roy Asa Haynes. He reorganized the bureau in 1925, resulting in the layoffs of numerous agents, including Izzy Einstein and Moe Smith in New York, who were nationally the most successful and famous team. Andrews saw Prohibition enforcement as a technical challenge and was not an ideological adherent to the dry movement. Andrews served until August 1, 1927.

From November 1, 1927 to June 1928, he was the president of Guardian Investment Trust in Hartford, Connecticut.

In June 1928, he became president of the Rubber Institute.

He married Charlotte Graves on October 5, 1899. They had one son: John G. Andrews.

He lived in Grand Isle, Vermont.

He died on November 23, 1950 in Northampton, Massachusetts. He is buried at Logan Cemetery in Hector, New York.

All content from Kiddle encyclopedia articles (including the article images and facts) can be freely used under Attribution-ShareAlike license, unless stated otherwise. Cite this article:
Lincoln Clark Andrews Facts for Kids. Kiddle Encyclopedia.