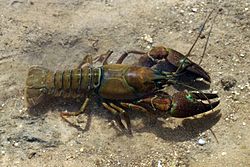 There are at least 30 species of crustaceans found in Montana. The Montana Department of Fish, Wildlife and Parks has identified a number of crustacean species as Species of Concern.

Crustaceans (Crustacea) form a very large group of arthropods, usually treated as a subphylum, which includes such familiar animals as crabs, lobsters, crayfish, shrimp, krill and barnacles. The 50,000 described species range in size from Stygotantulus stocki at 0.1 mm (0.004 in), to the Japanese spider crab with a leg span of up to 12.5 ft (3.8 m) and a mass of 44 lb (20 kg). Like other arthropods, crustaceans have an exoskeleton, which they moult to grow. They are distinguished from other groups of arthropods, such as insects, myriapods and chelicerates by the possession of biramous (two-parted) limbs, and by the nauplius form of the larvae.

Most crustaceans are free-living aquatic animals, but some are terrestrial (e.g. woodlice), some are parasitic (e.g. fish lice, tongue worms) and some are sessile (e.g. barnacles). The group has an extensive fossil record, reaching back to the Cambrian, and includes living fossils such as Triops cancriformis, which has existed apparently unchanged since the Triassic period. More than 10 million tons of crustaceans are produced by fishery or farming for human consumption, the majority of it being shrimp and prawns. Krill and copepods are not as widely fished, but may be the animals with the greatest biomass on the planet, and form a vital part of the food chain. The scientific study of crustaceans is known as carcinology (alternatively, malacostracology, crustaceology or crustalogy), and a scientist who works in carcinology is a carcinologist. 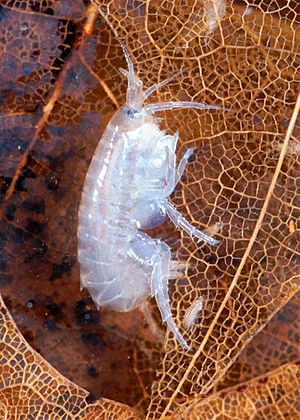 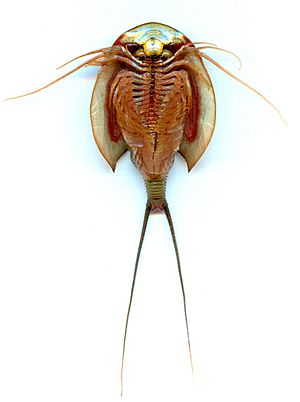 All content from Kiddle encyclopedia articles (including the article images and facts) can be freely used under Attribution-ShareAlike license, unless stated otherwise. Cite this article:
List of crustaceans of Montana Facts for Kids. Kiddle Encyclopedia.