List of historic properties in Williams, Arizona facts for kids

This is a list, which includes a photographic gallery, of some of the remaining historic buildings, houses, bridges, structures and monuments in Williams, Arizona, some of which are listed in the National Register of Historic Places (NRHP). Also included is the Grand Canyon Locomotive No. 539 which was built in 1917 for the Northern Pacific Railroad and is currently located in the Williams Santa Fe Depot. 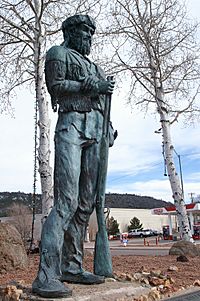 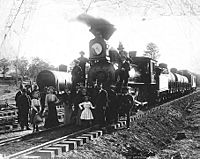 The area where the town of Williams is located was once inhabited by the Cohonina, early ancestors of the Hopi people and therefore, the area is considered as sacred.

In 1876, the first settlers in the area who were not Native-American, were cattle and sheep ranchers of European descent. In 1881, the town's founding fathers named the settlement "Williams" in honor of William Sherley "Old Bill" Williams a noted mountain man and frontiersman. Although "Old Bill" never lived there, the settlers also named a river the Bill Williams River; and a mountain Bill Williams Mountain after him. An 8-foot-tall bronze sculpture by B. R. Pettit, was erected in 1980 in the Bill Williams Monument Park of Williams. The town's population continued to grow and as such soon had its own post office.

Four fires practically ravaged the town. The first of these fires occurred in 1884, it consumed 36 businesses, 2 hotels and 10 homes. Another occurred in 1901 and one in 1903, destroying six saloons, one restaurant and two homes. The fourth fire in 1908, took out an entire city block and 10 homes. The Tetzlaff Building was one of the few structures that survived three fires because unlike the other buildings, that were made basically out of wood material, the Tetzlaff was made of brick. The Tetzlaff Building was built in 1897, by a German immigrant by the name of August Tetzlaff. The building housed a saloon.

Williams was incorporated as a town on July 9, 1901. The avenues in the commercial area were named Railroad and Bill Williams, while those in the residential area were named after American Civil War generals (Grant, Sherman, Sheridan, Hancock, Meade).

In 1901, the same year that the town of Williams was incorporated, the Williams and the Atchison, Topeka & Santa Fe Railway extended its passenger line from Williams to the South Rim of the Grand Canyon, thus Williams became known as "Gateway to the Grand Canyon". The slogan first appeared in the Williams News in 1901. The railroad extension greatly increased tourism to the area. In 1908, the Frey Marcos Hotel, one of the historic Harvey House's was inaugurated. It was built alongside the Williams Santa Fe Depot.

There were many saloons on Railroad Ave. The local government at the time did not mind the many of the buildings of vice to an area on Railroad Avenue which became known as “Saloon Row”. The oldest of these buildings are the Tetflaff and Cabinet Saloon. Both of these structures were survivors of the 1908 fire.

The historic Route 66, which runs through Williams, was completed in 1926. The establishment of Route 66 was one of the major factors which contributed to the growth of the town. People who emigrated to the western part of the United States and tourists from different parts of the country often stopped and visited the city. As a consequence many motels were built, among them the Motor Hotel, located on the southeast corner of 4th Street, and the 9 Arizona Motor Hotel located on 315 W. Route 66.

On October 13, 1984, Interstate 40 was opened around the town which represented the essential end of US 66. However, an agreement was reached with the government which allowed the state to build three exits to Williams, thereby the town was able to avoid the state of abandonment which normally occurs when a town is bypassed by a highway. The following year Route 66 was decommissioned.

The fact that a property is listed in the National Register of Historic Places does not mean that the property is safe from being demolished by its owner. According to Jim McPherson, Arizona Preservation Foundation Board President:

"It is crucial that residents, private interests, and government officials act now to save these elements of our cultural heritage before it is too late."

The city has two historic districts and various individual properties listed in the National Register of Historic Places. The two districts are the Williams Historic Business District and the Williams Residential Historic District. Also included in this list are properties which are in the South Kaibab Plateau of the Kaibab National Forest whose southern boundary lies within the town limits of Williams.

However, not all of the individual structures qualify as historical within the district. This is due to the fact that most are owned by private owners who have the undeniable right to demolish or change the façade of the structure for commercial reasons if he or she so desires. According to the National Historic Landmarks Program: Listing of private property as a National Historic Landmark or in the National Register does not prohibit under Federal law or regulations any actions which may otherwise be taken by the property owner with respect to the property. According to a "Historic Resource Survey" which was made of Route 66 in Arizona, some of the structures are not individually eligible for inclusion in the National Register of Historic Places. However, certain individual properties have been recognized as historical contributors to the district with a plaque.

The following properties are pictured:

Tourism became a very important economic factor for the town. Williams offered train service to and from the Grand Canyon South Rim. The tourist who traveled to Williams by automobile played an important role in the economy development of the town. The existence of service stations and motels was directly related to the tourist traffic in the area. Many of the older service stations have currently been converted into restaurants. Pictured are some of these structures who played an important role in the automotive tourist traffic in Williams. 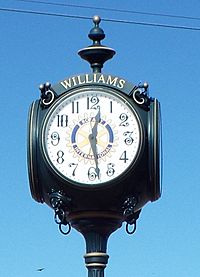 The Williams Residential Historic District is bounded by Grant and Fairview Aves. and Taber and 6th Sts. The boundary of the Williams Residential Historic District defines a concentration of late nineteenth and early to middle twentieth century buildings that still retain historic and architectural integrity. All of the buildings relate to residential development that occurred in the Williams Townsite and the Perrin Addition from 1890 to 1941. Some of the houses in the district incorporated a few prefabricated millwork components. The district was added to the National Register of Historic Places on January 8, 1998, reference #97001603. There are two individual properties within the historic district which are solely listed in the NRHP. They are the First Methodist Episcopal Church and Parsonage and the Negrette House.

The following properties are pictured: 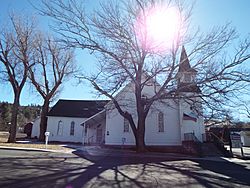 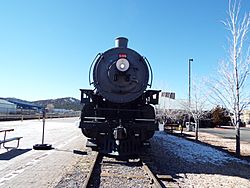 The Williams Ranger District of the Kaibab National Forest

The Southern part of the Kaibab National Forest is divided into two districts, the Tusayan Ranger District (offices in the Grand Canyon), and the Williams Ranger District (offices in Williams). Many of these sites were inhabited by the prehistoric "Cohonina". The Williams Region Arizona Site Stewards monitor many of these sensitive sites, helping to report and deter vandalism.

The following places and/or structures are listed in the National Register of Historic Places located within the Williams district of the forest.

All content from Kiddle encyclopedia articles (including the article images and facts) can be freely used under Attribution-ShareAlike license, unless stated otherwise. Cite this article:
List of historic properties in Williams, Arizona Facts for Kids. Kiddle Encyclopedia.