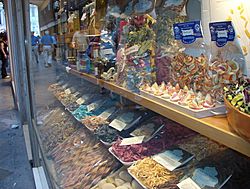 There are many different varieties of pasta, a staple dish of Italian cuisine since they were first introduced by Muslim occupiers from around 800 A.D.. They are usually sorted by size, being long (pasta lunga), short (pasta corta), stuffed (ripiena), cooked in broth (pastina), stretched (strascinati) or in dumplinglike form (gnocchi/gnocchetti). Yet, due to the variety of shapes and regional variants, "one man's gnocchetto can be another's strascinato".

Some pasta varieties are uniquely regional and not widely known; many types have different names based on region or language. For example, the cut rotelle is also called ruote in Italy and wagon wheels in the United States. Manufacturers and cooks often invent new shapes of pasta, or may rename preexisting shapes for marketing reasons.

Italian pasta names often end with the masculine plural suffixes -ini, -elli, -illi, -etti or the feminine plurals -ine, -elle etc., all conveying the sense of "little"; or with -oni, -one, meaning "large". Other suffixes like -otti ("largish") and -acci ("rough", "badly made") may also occur. In Italian, all pasta type names are plural.

Each pasta has its own unique purpose. For example, penne and fusilli can hold more sauces than spaghetti due to their hollow shapes. Additionally, the choice of pasta can be used to complement the consistency of sauces used in the cooking process. These choices, however, are mostly due to tradition and habits.

Long pasta may be made by extrusion or rolling and cutting.

Short cut pasta (''pasta corta'') are mostly made by extrusion.

Strascinati are mostly hand-made disks of pasta dragged (strascinato) across a wooden board. Orecchiette are the typical example.

These are small types of pasta, mainly used in soups, many of which belong to the pastina ("small pasta") family.

The name raviolo (plur. ravioli) can be used as a generic description for almost any type of pasta with filling.

All content from Kiddle encyclopedia articles (including the article images and facts) can be freely used under Attribution-ShareAlike license, unless stated otherwise. Cite this article:
List of pasta Facts for Kids. Kiddle Encyclopedia.