List of tallest buildings in Washington, D.C. facts for kids 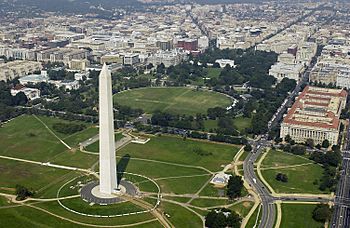 This list of tallest buildings in Washington, D.C. ranks high-rises in the U.S. capital of Washington, D.C. The tallest structure in the city, excluding radio towers, is the Washington Monument, which rises 555 feet (169 m) and was completed in 1884. The structure, however, is not generally considered a high-rise building as it does not have successive floors that can be occupied. The tallest habitable building in the city is the Basilica of the National Shrine of the Immaculate Conception, which rises 329 feet (100 m). The second-tallest building in Washington is the Old Post Office Building, which is 315 feet (96 m) high. The third-tallest building in the city is the Washington National Cathedral, which rises 301 feet (92 m) above grade. The cathedral is built on high ground known as Mount St. Alban, 400 feet (120 m) above sea level, which makes the central tower the "highest" point in the District. As of November 2011, there are 410 completed high-rises in the city. 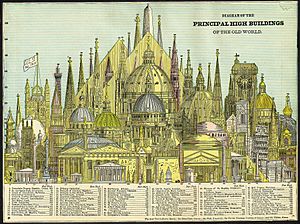 Diagram of the Principal High Buildings of the Old World, 1884. The Washington Monument (although not in the Old World), is the tallest structure represented.

Washington's history of high-rises began with the completion in 1894 of The Cairo, an apartment building, which is considered to be the city's first high-rise. The building rises 164 feet (50 m) and 14 floors. Washington went through an early high-rise construction boom from the late 1890s to the mid-1930s, during which time the Old Post Office Building and the Federal Triangle were built. The city then experienced a major building boom from the early 1940s to the late 1990s, during which the city saw the completion of 31 of its 48 tallest buildings, including One Franklin Square and 700 Eleventh Street. However, although the city is home to several high-rises, none are considered to be genuine "skyscrapers"; only two completed buildings surpass 200 feet (61 m).

The height of buildings in Washington is limited by the Height of Buildings Act. The original Act was passed by Congress in 1899 in response to the 1894 construction of the Cairo Hotel, which is much taller than the majority of buildings in the city. The original act restricted the heights of any type of building in the city to be no higher than 110 feet (34 m), 90 feet (27 m) for residential buildings. In 1910, the 61st United States Congress enacted a new law which raised the overall building height limit to 130 feet (40 m), but restricted building heights to the width of the adjacent street or avenue plus 20 feet (6.1 m); thus, a building facing a 90-foot (27 m)-wide street could be only 110 feet (34 m) tall. However, building heights are measured from the sidewalk or curb to the edge of the roof. Architectural embellishments, mechanical rooms, and common rooftop structures may be exempted from the overall height limit, provided they are set back from the roof line. The heights of buildings listed here may therefore exceed the general height limit as measured for the purpose of the city's zoning laws. 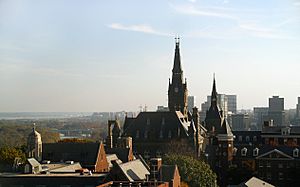 In modern times the skyline remains low and sprawling, keeping with Thomas Jefferson's wishes to make Washington an "American Paris" with "low and convenient" buildings on "light and airy" streets. Washington's height restriction, however, has been assailed as one of the primary reasons why the city has inflated rents, limited affordable housing, and traffic problems as a result of urban sprawl. Much like La Defense near Paris, the region's tallest buildings near the central business district are located in Rosslyn, Virginia, directly across the Potomac River from Georgetown. 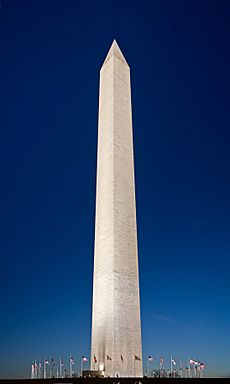 The Washington Monument is the second-tallest structure in the District of Columbia.

The Basilica of the National Shrine of the Immaculate Conception is the tallest building in Washington. 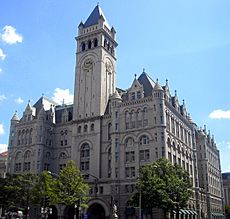 The Old Post Office Building, the second-tallest building in Washington 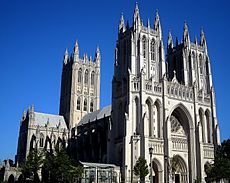 The Washington National Cathedral, the third-tallest building in Washington 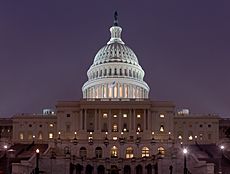 The United States Capitol, the fourth-tallest building in Washington

The National Archives Building, the sixteenth-tallest building in Washington

The Thomas Jefferson Building, the ninth-tallest building in Washington

This lists ranks Washington high-rises that stand at least 150 feet (46 m), based on standard height measurement. This includes spires and architectural details but does not include antenna masts. The "Year" column indicates the year in which a building was completed. Freestanding towers, while not habitable buildings, are included for comparison purposes; however, they are not ranked. The majority of the tallest structures in the city are tall broadcasting towers located in the northern and western sections of the district.

This lists buildings in Washington that have been demolished and at one time stood at least 150 feet (46 m) in height.

This lists buildings that once held the title of tallest building in Washington, D.C. This list excludes the 555-foot (169 m) Washington Monument, which has stood as the tallest non-building structure in the city since 1884.

A. Not a habitable building and is therefore not ranked, but it is included in this list for comparative purposes.

All content from Kiddle encyclopedia articles (including the article images and facts) can be freely used under Attribution-ShareAlike license, unless stated otherwise. Cite this article:
List of tallest buildings in Washington, D.C. Facts for Kids. Kiddle Encyclopedia.