Llanfyllin () is a small market town in a sparsely-populated area in Powys, Wales. Llanfyllin's population in 2011 was 1,482, of whom 34.1% could speak Welsh. Llanfyllin means church or parish (llan) of St Myllin ('m' frequently mutates to 'f' in Welsh). 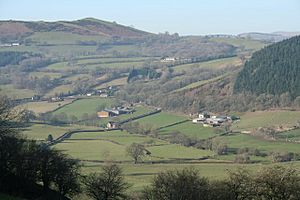 The valley of the River Cain near Llanfyllin

The town lies in the valley of the River Cain near the Berwyn Mountains in Montgomeryshire, 14 miles (23 km) southwest of Oswestry and 15 miles (24 km) from Montgomery. The River Cain is joined by the small River Abel in Llanfyllin (presumably named after Cain and Abel in the Bible), and meanders through the valley, flowing into the River Vyrnwy at Llansantffraid.

The town lies between Shrewsbury and Bala, for a long time the key market towns in this area of Wales and the Welsh borders. At nearby Bodyddon there is evidence of an early British settlement. Llanfyllin may be the "Mediolanum among the Ordovices" described in Ptolemy's Geography (c. AD 150), although others argue for Meifod or Caersws.

The town is known for its holy well, Fynnon Coed y Llan. The well is dedicated to Saint Myllin, who is reputed to have baptised people here in the sixth century. The parish church is also dedicated to Saint Myllin. There is a tradition that Saint Myllin is the Irish bishop, Saint Mo Ling (also named Moling Luachra) (614–697). However, this is uncertain. There is no record of Mo Ling travelling to Wales, and there is a tradition that Myllin is buried under the altar of Llanfyllin church whereas Mo Ling is believed to have been buried at his monastery in Ireland.

The medieval motte and bailey castle of Tomen yr Allt was probably destroyed by Llywelyn ap Gruffudd in 1257. The castle earthworks are still present.

Llanfyllin was granted a charter as a market town in 1293 by Llywelyn ap Dafydd under Edward I, one of only two Welsh towns to have received its charter from a native ruler. The charter was confirmed by Edward de Charlton, Lord of Powys under Henry V.

Llanfyllin is noteworthy for the quality and quantity of its buildings in locally-made brick. 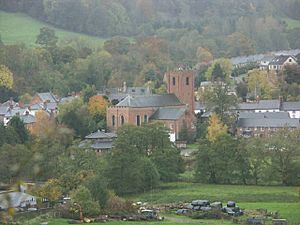 The parish church of St Myllin (Church in Wales) was founded in the seventh century, according to tradition by St Myllin. The present building which dates to around 1706 is mainly of locally-made red brick with battlements and a Welsh slate roof. It has a tower with six bells. It was adapted and extended by 1863 in the neo-Norman style, and restored in 1959.

Pendref Chapel (Congregationalist) is said to be the oldest Welsh independent church in Powys. In 1640 its first minister was Vavasor Powell. The chapel was initially built in 1708. The chapel was destroyed in the Jacobite rising of 1715, and was re-erected at government expense. The present building dates from 1829.

An historic house known as The Hall still exists on Vine Square within the town. Its origins as Plas Uchaf (Welsh for Upper Hall) are 16th century, it is a T-shaped two-storey timber-framed building with an attached open hall, remodelled in about 1599 adding a floor in the hall and stairs between the house and the hall. It was further remodelled in 1832 with the addition of an extra storey and three gables facing the square. King Charles I stayed at The Hall in November 1643. The Hall is Grade II listed. 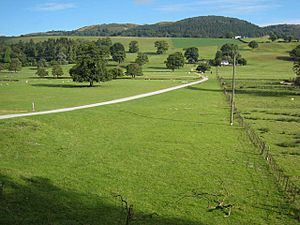 Bodfach Hall is a Grade II listed building about 1 km north-west of Llanfyllin in the hamlet of Bodfach. It is likely that a house was built on the site after the destruction in 1257 of Tomen yr Allt, a motte-and-bailey castle which stood on one of the hills above it. The property is first recorded in 1160 in the will of Madog ap Maredudd, Prince of Powys. Sion Kyffin, a descendant of Madog, extended a house on the site in 1661, as recorded in an inscription above an old door on the west of the house. The house was considerably modified and extended over the years and was rebuilt c. 1870. In 1945 the estate was broken up; most of the land was bought by its tenant farmers, and the hall and 33 acres were sold to one buyer to become an hotel.

Llanfyllin Golf Club (now defunct) was founded in 1909 in Bodfach Park; the president was Sir John Lomax, the owner of Bodfach Hall and former High Sheriff of Montgomeryshire. It was a 9-hole course with a membership of 40 in 1914. It disappeared after World War I.

Llanfyllin is also increasingly well known for the old Union Workhouse, known as Y Dolydd (Welsh for The Meadows) locally, and built in 1838. This old Victorian building had stood empty since the mid-1980s until a local voluntary group, the Llanfyllin Workhouse Project, got involved and are slowly renovating it to make a local centre for Arts, Creativity and the Environment. It is also home to the Llanfyllin Workhouse Festival. 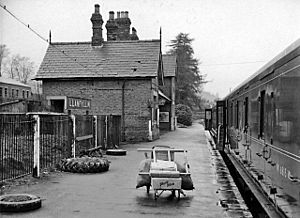 The town sits on the main route between Welshpool and Bala. The A490 road connects the town to Churchstoke, and terminates just after passing through the town.

The Llanfyllin Branch of the Cambrian Railways opened in 1863, to provide access to the limestone quarries along the valley, terminating at Llanfyllin station. The main line from Oswestry to Newtown (Powys) closed in 1965, as did the branch line to Llanfyllin, under the "Beeching Axe".

The Lonely Tree of Llanfyllin

The Lonely Tree was named Wales Tree of the Year 2014 by the Woodland Trust, and was entered in the 2015 European Tree of the Year competition. It fell in a storm in February 2014. An unsuccessful attempt was made to rescue it by packing its roots with nearly sixty tonnes of earth.

All content from Kiddle encyclopedia articles (including the article images and facts) can be freely used under Attribution-ShareAlike license, unless stated otherwise. Cite this article:
Llanfyllin Facts for Kids. Kiddle Encyclopedia.