Montgomery (Welsh: Trefaldwyn; meaning "the town of Baldwin") is a town in the Welsh Marches, administratively in the Welsh county of Powys. It is the traditional county town of the historic county of Montgomeryshire, to which it gives its name. The town centre lies one mile (1.6 km) from the English border. Its castle, Montgomery Castle, was started in 1223, and its parish church in 1227. Other locations in the town include The Old Bell Museum, the Offa's Dyke Path, the Robber's Grave and the town wall. The large Iron Age hill fort of Ffridd Faldwyn is sited to the NW of the town and to the W of Montgomery Castle. 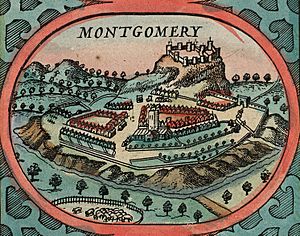 Illustration of Montgomery from John Speed's map of Wales, 1610

The town was established around a Norman stone castle on a crag. The castle had been built in the early 13th century to control an important ford over the nearby River Severn and replaced an earlier motte and bailey fortification at Hendomen, one mile away. An important supporter of King William I (the Conqueror), Roger de Montgomery, originally from Montgomery in the Pays d'Auge in Normandy, was given this part of the Welsh Marches by William and his name was given to the town surrounding the castle.

The Treaty of Montgomery was signed 29 September 1267 in Montgomeryshire. By this treaty King Henry III of England acknowledged Llywelyn ap Gruffudd as Prince of Wales. Montgomery was sacked at the beginning of the 15th century by the Welsh Prince Owain Glyndŵr. At that time, the castle and surrounding estates were held by the Mortimer family (the hereditary Earls of March) but they came into royal hands when the last Earl of March died in 1425. In 1485, King Richard III was defeated at the Battle of Bosworth and the Royal Estates, including Montgomery and its castle, passed into the hands of the new King, Henry VII, the first Tudor king, and a Welshman. The castle was then given to another powerful Welsh family, the Herberts.

During the Civil War, the castle was captured by Parliamentary forces and subsequently slighted (damaged) to remove its military threat.

As a county town, Montgomery prospered, and its buildings give the small town its current character.

In 1923 the Montgomeryshire County War Memorial was completed to commemorate fallen servicemen from Montgomeryshire. The memorial is on a hill about 1 km SW of the town.

Religious poet and orator George Herbert was born in Montgomery in 1593.

Actress Julie Christie lived for a long time on the outskirts of the town.

The parish church was founded in the 1220s, with later additions including late 13th-century chancel and transepts and a 19th-century tower. The church is Grade I listed. Perhaps the most remarkable features of the church are the ornate rood screen, misericords and stalls which were transferred to the church from Chirbury Priory in Shropshire after the Dissolution of the Monasteries in the 16th century. The south transept shows evidence of Montgomery's close association with the Herbert family. The centrepiece is the Elizabethan era tomb or church monument to Richard Herbert (died 1596) of Montgomery Castle, father of poet and Anglican divine George Herbert. This association is recalled in a memorial poem to a well-known local man J. D. K. Lloyd, who wrote the following poem after the style of George Herbert:

This O, enclosed around, smoothe, with no entrance found, yet soone with newest life to overflow So has thy tombe, by Pilate sealed, to us that third day Life revealed, O grant that I, some morning bright, my earthly Shell, then broke, may wear, in White, Thy Yoke.

Richard's grandson, another Richard Herbert, 2nd Baron Herbert of Chirbury, the last Herbert to have lived at Montgomery Castle, was buried in the church in 1655.

In 1821 John Davies of Wrexham was sentenced to death by hanging at Montgomery for highway robbery. Throughout his trial, and after the sentence, Davies declared his innocence and prayed that God would not allow the grass to grow on his grave for a hundred years as a sign of his innocence. His grave remained bare for at least a century, giving birth to the legend of the Robber's grave. The grave (now grassed) can still be seen in the churchyard. Besides the legendary Robber's Grave, the churchyard also contains the war graves of two soldiers of World War I and a soldier and two airmen of World War II. 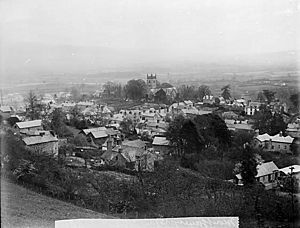 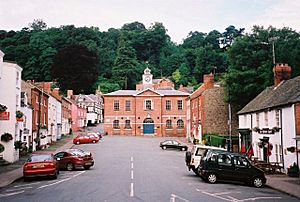 The last remaining Georgian town hall in Montgomeryshire. The red brick Town Hall forms a striking termination to Broad Street, although the centre of the building is offset to the north of the line of the street. Built by William Baker of Audlem, 1748–51, for Henry Arthur Herbert, 1st Earl of Powis, for whom Baker had also in 1745 provided designs for a new Town Hall at Bishops Castle. In 1828 Thomas Penson, at the expense of Edward Clive, 1st Earl of Powis, raised the roof level over the first floor and introduced sash windows. The clock tower was added in 1921. The predecessor of this building was probably a half-timbered structure, which the Speed map of 1610 shows was sited, lengthways, in the middle of Broad Street. 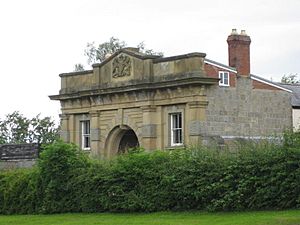 Gateway to the Old Gaol at Montgomery

The former Montgomeryshire County Gaol stood at the end of Gaol Road. Designed by the County Surveyor Thomas Penson, c.1830-32. Brick faced with stone. The tall octagonal governor's house, with the chapel above, was at the centre of four radiating two- and three-storey wings. One of the yards was fitted with a treadmill. The gatehouse was built into the wall to face a new approach in 1866 by J.W. Poundley. Powerful ashlar triumphal arch, with four giant semi-rusticated pilasters. The Gaol was closed in 1878 and all that now remains, apart from the gatehouse, is the Governor's House and the high wall of one cell block.

The Old Bell Museum is a former 16th-century inn which has been converted into a museum.

Formerly the National School of 1864. The school was built by the architect Thomas Nicholson on land donated by Lord Powis and financed by the then Rector and the Hereford Diocesan Board of Education as well as many smaller gifts. Stone, many-gabled Gothic with splay-footed buttresses, well designed and detailed. Master's house to left and gabled school building to right, and a wing beyond. The assembly hall was added in 1952 by Herbert Carr, the Montgomeryshire county architect. The school remains an important feature of community life. It remains a church school (now in the diocese of St. Asaph) under the control of Powys County Council.[1]

All content from Kiddle encyclopedia articles (including the article images and facts) can be freely used under Attribution-ShareAlike license, unless stated otherwise. Cite this article:
Montgomery, Powys Facts for Kids. Kiddle Encyclopedia.