The Lobstick Lake has a large population of lake trout. Fishermen and anglers frequently catch fish weighing five pounds, with some captured specimens being over 40 pounds. The fishing season on the lake lasts throughout the year, but the best season for fishing are late spring and early summer. Fishing aficionados recommend the section of the lake near the dam as the best spot. 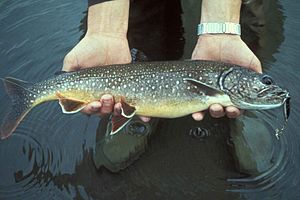 All content from Kiddle encyclopedia articles (including the article images and facts) can be freely used under Attribution-ShareAlike license, unless stated otherwise. Cite this article:
Lobstick Lake Facts for Kids. Kiddle Encyclopedia.