The Churchill River, formerly known by other names, is a river in Newfoundland and Labrador, Canada. It flows east from the Smallwood Reservoir into the Atlantic Ocean via Lake Melville. The river is 856 km (532 mi) long and drains an area of 79,800 km2 (30,800 sq mi), making it the longest river in Atlantic Canada.

In 1821, Captain William Martin of HM brig Clinker renamed the river the Hamilton River after the then-current commodore-governor of Newfoundland Charles Hamilton. The name gradually supplanted use of the Grand River before being replaced on 1 February 1965 by provincial premier Joey Smallwood. Smallwood renamed it the "Churchill River" after the former British prime minister Winston Churchill ahead of the beginning of construction on the river's major hydroelectric project. 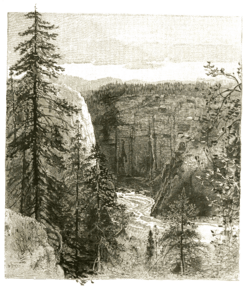 The canyon below Churchill Falls, as it appeared in the 1890s

The river flows in an arc, first north from Ashuanipi Lake though the saucer-shaped Labrador Plateau, and then mainly east through a series of lakes. Several of these lakes have been flooded to create the Smallwood Reservoir. The river then flows through a rocky canyon which is hundreds of feet deep, over Churchill Falls, and through a series of rapids below the falls. The water flow in the canyon has been mainly diverted underground through a giant hydroelectric power generating plant. The river continues eastward until it flows into Lake Melville.

Churchill Falls is the site of a major hydroelectric project, which diverted almost all of the stream that once fell over Churchill Falls. It presently has a capacity of 5,428 MW and other slated hydroelectric plants on the river will bring the total to over 9,200 MW. The Churchill Falls development has become a source of friction between two Canadian provinces, as Newfoundland and Labrador asserts that Quebec's Hydro-Québec (despite having provided a major part of the financing and access to the North American power grid) has taken a disproportionate share of the development's profits. Hydro-Québec still buys power from the dam at rates established in the 1969 power purchase agreement.

In 2012 divers using side scan sonar found what they believe is the wreck of a U-boat just downstream of Muskrat Falls, validating a local legend. However, examination of historical records shows this to be unlikely, and the sonar images were quite grainy.

All content from Kiddle encyclopedia articles (including the article images and facts) can be freely used under Attribution-ShareAlike license, unless stated otherwise. Cite this article:
Churchill River (Atlantic) Facts for Kids. Kiddle Encyclopedia.