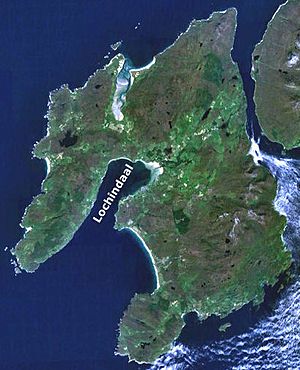 Loch Indaal (or Lochindaal) is a sea loch on Islay, the southernmost island of the Hebrides, off the west coast of Scotland. Together with Loch Gruinart to the north, it was formed by the Loch Gruinart Fault, which branches off the Great Glen Fault.

At night the lights of the villages along the three sides of the loch inspired the well-known folk song "The Lights of Lochindaal" by Iain Simpson.

South of Bowmore the entire coastline is a six-mile-long sandy beach stretching to Kintra. This beach, known as the Big Strand, is very popular with holidaymakers and locals alike in the summer.

Loch Indaal slopes gently from its NE corner down to its opening into the Atlantic. At the mouth of the loch, which lies between Portnahaven to the north and the American Monument on The Oa to the south, the depth is around 40 metres, rising steadily upwards towards the northeast and reaching a depth of barely 10 metres between Laggan Point and Port Charlotte.

The waters of the loch are calm and safe but the approaches are hazardous especially for small vessels. There are tidal streams, eddies, races and heavy overfalls both in the east and west flowing streams of the tide.

The Big Strand and Laggan Bay

The eastern shore of the loch is taken up by the six mile length of the Big Strand, the area as a whole being known as Laggan Bay. The Big Strand itself is sandy along its whole length being broken by a rocky outcrop roughly half way along its length at Glenegedale Airport.

Glenegedale Airport has two runways, although one is not in use. The approach from to the northwest runway takes aircraft over Lochindaal at very low altitude giving excellent views of Laggan Bay.

All content from Kiddle encyclopedia articles (including the article images and facts) can be freely used under Attribution-ShareAlike license, unless stated otherwise. Cite this article:
Loch Indaal Facts for Kids. Kiddle Encyclopedia.