Lock and Dam No. 4 facts for kids

Lock and Dam No. 4 is a lock and dam located near Alma, Wisconsin and Kellogg, Minnesota on the Upper Mississippi River around river mile 752.8. The lock and dam are owned and operated by the St. Paul District of the United States Army Corps of Engineers-Mississippi Valley Division. 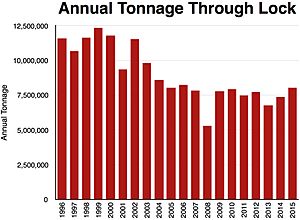 The lock and dam was constructed and placed in operation in May 1935. There were ten major injuries and three deaths recorded during construction of the facility. Its last major rehabilitation was from 1988 to 1994. 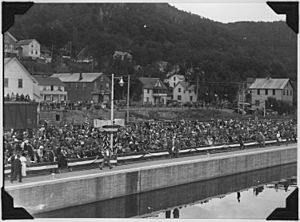 All content from Kiddle encyclopedia articles (including the article images and facts) can be freely used under Attribution-ShareAlike license, unless stated otherwise. Cite this article:
Lock and Dam No. 4 Facts for Kids. Kiddle Encyclopedia.