Los Trancos Creek (meaning "barriers" or "cattle guards" from the Spanish "Las Trancas") is a creek that flows northerly from Monte Bello Ridge on the northeast slope of the Santa Cruz Mountains to its confluence with San Francisquito Creek at Stanford University in California, United States. The creek forms the boundary between northwestern Santa Clara County and southeastern San Mateo County.

High winter flows in Los Trancos Creek are diverted by Stanford's Lagunitas Diversion Dam just downstream from Rossotti's to Felt Lake. The lake is actually a reservoir that lies west of Interstate 280 and bounded by Alpine Road and the Pearson Arastradero Preserve on Arastradero Road. Felt Lake was constructed in 1876 by gold miner and lumber dealer Job Johnston Felt, who bought 700 acres in northern Santa Clara County to farm. It was his dream to build two water companies, San Francisquito and Los Trancos. Felt built the original diversion from Los Trancos Creek to Felt Lake. By the mid-1880s, and facing opposition to his plans, the elderly Felt abandoned the water company idea and sold the farm to Timothy Paige, who quickly sold it to Leland Stanford Sr. in 1887. The university later added a larger dam to hold irrigation water for the growing campus.?

The next watershed to the west is Corte Madera Creek, another tributary of San Francisquito Creek. The confluence of Los Trancos Creek with San Francisquito Creek occurs just below Piers Lane Road (between Interstate 280 and the Stanford Golf Course) in a small residential island of land belonging to Menlo Park within Stanford's lands. 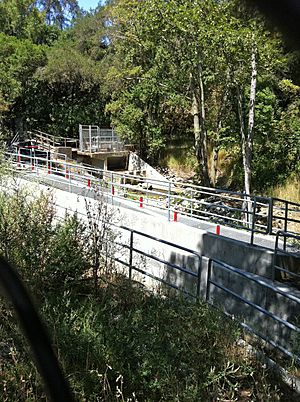 In 1929 Stanford installed a diversion dam on Los Trancos Creek to its Felt Lake water storage reservoir. The dam, located just below the intersection of Arastradero and Alpine Roads, blocked access of anadromous steelhead trout (Oncorhynchus mykiss) to over 3 miles (4.8 km) of pristine upstream spawning grounds. In 2009, Stanford University completed construction of a new fish screen and ladder as the previous fish ladder was an "Alaska Steep Pass" designed for much higher flows. The upper watershed is wholly protected within the Los Trancos Open Space Preserve just northwest of Page Mill Road and east of Skyline Boulevard. Spawning steelhead in Los Trancos Creek below the Felt Lake diversion dam vary from zero in drought years to several hundreds in wetter years and occurs from February to April. Steelhead spend two years in freshwater before heading to the Bay and field studies in the Stanford portion of Los Trancos Creek have found hundreds of young trout ranging from ~140 per mile to nearly 600 per mile.

From 2016 through 2020, a pair of bald eagles (Haliaeetus leucocephalus) has nested in a large eucalyptus tree near Felt Lake and the Pearson-Arastradero Preserve.

Excellent hiking from the Piers Lane parking area on Alpine Road crosses over San Franciscquito Creek and Los Trancos Creek just above their confluence and proceeds to the Stanford Dish. It is open from sunrise to sunset and no bicycles or dogs are allowed.

All content from Kiddle encyclopedia articles (including the article images and facts) can be freely used under Attribution-ShareAlike license, unless stated otherwise. Cite this article:
Los Trancos Creek Facts for Kids. Kiddle Encyclopedia.