Loseley Park is a large Tudor manor house with later additions and modifications 3 miles (4.8 km) south-west of Guildford, Surrey, England in Artington close to the hamlet of Littleton. The estate was acquired by the direct ancestors of the current owners, the More-Molyneux, at the beginning of the 16th century. The house built for Sir William More is a Grade I listed building, the highest rank in architecture or heritage. Loseley appears in Domesday Book of 1086 as Losele. It was held by Turald (Thorold) from Roger de Montgomery. Its domesday assets were: 2 hides. It had 4 ploughs, 5 acres (20,000 m2) of meadow. It rendered £3. The papers of Sir Thomas Cawarden, Master of the Revels were formerly preserved in the house. Loseley Park is still the residence of the More-Molyneux family and is open to the public. The 17th century tithe barn is available for weddings. 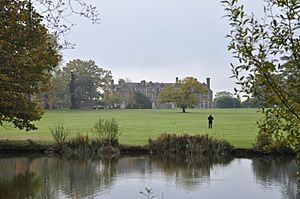 The present house was built between 1562 and 1568 with stone brought from the ruins of Waverley Abbey. The new house replaced a smaller one which Elizabeth I declared was not 'adequate' for her to visit and requested something larger be built. The great hall is the principal room containing panelling from Henry VIII's Nonsuch Palace, a minstrel's gallery, carvings by Grinling Gibbons, panels from Henry VIII's banqueting tents and a collection of royal and family portraits.

The drawing room has a gilded ceiling that was commissioned for James I's visit and a massive chalk fireplace designed by Hans Holbein. The carvings above the library fireplace (dated 1570) commemorate one of Elizabeth I's visits. Sir William More's room contain an 18th-century Vauxhall mirror. Two bedrooms named the King's Room and the Queen's Room were used by James I and Elizabeth I respectively. The house contains one of the few paintings of Anne Boleyn. 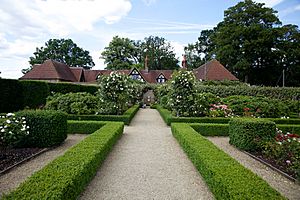 The walled garden, based on a design by Gertrude Jekyll, contains a series of "rooms" with different themes running through them. The redevelopment of the garden commenced in 1993/4 with the Rose Garden and continued with the Herb Garden, Flower Garden, White Garden and, most recently, the organic Vegetable and Cut Flower Garden. The gardens are surrounded by an old wall of similar age to the house and contain a vine walk, a huge spread of wisteria, the moat and moat walk, and the old mulberry tree around which a family prophecy revolves.

Loseley Park and house has been used as a filming location for several productions. One of the earliest was The Counterfeit Plan (1957). The Internet Movie Database also lists : A Dandy in Aspic (1968), The Legacy (1978), Midsomer Murders (1997 TV series), The Worst Witch (1998 TV series), Agatha Christie's Marple: Why Didn't They Ask Evans? (2008) and By the Pricking of My Thumbs (2006), Stately Suppers (2006 TV series), Sense and Sensibility (2008 miniseries), Emma (2009 miniseries) and The Special Relationship (2010). In 2016, the house was featured in the Netflix series The Crown. The films The Favourite & Rebecca were both partly shot here.

In 2020, Belgravia (TV series) filmed some scenes here; the character Anne Trenchard's manor house is fictional, so filming was done as the house at Loseley Park]].

All content from Kiddle encyclopedia articles (including the article images and facts) can be freely used under Attribution-ShareAlike license, unless stated otherwise. Cite this article:
Loseley Park Facts for Kids. Kiddle Encyclopedia.