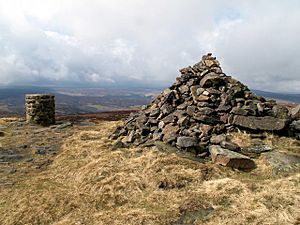 The top of Lost Lad

Lost Lad is a bare, conical moorland summit and subpeak of the nearby Back Tor which rises about 600 metres to the southeast. The top of Lost Lad is marked by a cairn and toposcope and there are good views over the surrounding northern Peak District.

Lost Lad is actually the name of the cairn at the top, whose name refers to a legend about a shepherd boy from the lost village of Derwent. According to the legend the boy became lost on the moors in a blizzard and died. His body was found the following spring by a passing shepherd and nearby were the words "Lost Lad" written on a rock.

All content from Kiddle encyclopedia articles (including the article images and facts) can be freely used under Attribution-ShareAlike license, unless stated otherwise. Cite this article:
Lost Lad Facts for Kids. Kiddle Encyclopedia.