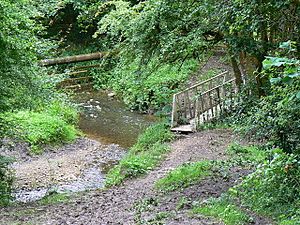 Lower Woods is a 280.1-hectare (692-acre) biological and geological Site of Special Scientific Interest near the village of Wickwar, South Gloucestershire, notified in 1966 and renotified in 1985. The site area has increased at last revision in 1974 to a 284.1-hectare (702-acre) site. The site is a nature reserve managed by the Gloucestershire Wildlife Trust.

Lower Woods are the most extensive area of ancient woodlands and seminatural woodland in the former county of Avon and now in South Gloucestershire. It is one of the largest ancient woodlands in the south-west of England and covers some three square kilometres. There are three waymarked trails and over sixty miles of paths, rides and wide grassy 'trenches' (ancient roads).

This large reserve is made up of twenty-three woods and coppices, the boundaries of which have remained unchanged for several centuries. The woods are linked by a network of grass trenches and ridges. The Little Avon River runs through the centre of the site. The woods are situated in the damp clay soils of the Vale of Berkeley and are made up of the distinct woodlands as well as grassland areas.

The site is adjacent to Yarley Meadows which is also an SSSI.

The site contains significant exposures of clays, shales, limestones and bone-beds (Rhaetic time period). These would have been laid down some 200 million years ago in a shallow sea. The exposures in this area have been a source of research for some 150 years, notably the units called the Westbury Beds, the Cotham Beds and the Liostrea Beds. The site has two horizons of Landscape Marble and outcrops of conglomeratic bone-beds (in the Westbury shales). The latter contain a significant amount of fossil fish, and sedimentological features.

Fuller information is available from the Gloucestershire Wildlife Trust nature reserves handbook and the Trust publication on the natural history of the site. Large parts of the woodland are traditional coppice-with-standards, with pedunculate oak and ash over hazel coppice. There is a wide range other shrubs including field maple, holly, goat willow, spindle, wild privet, midland hawthorn and guelder-rose. There are dense stands of wild service tree which is an indicator of ancient woodland. There is some sessile oak and along the riverside alder. Some of the wood has developed to a high forest structure.

The main aims are to monitor the maintenance and enhancement of existing grassland areas, the coppice regimes and to remove exotic species of conifer and hybrid poplar. Coppice must be maintained at-standards. Scrub cutting is done in the original trenches, ensuring exposure of the old wood banks and ditches.

All content from Kiddle encyclopedia articles (including the article images and facts) can be freely used under Attribution-ShareAlike license, unless stated otherwise. Cite this article:
Lower Woods Facts for Kids. Kiddle Encyclopedia.