The hazel dormouse or common dormouse is Muscardinus avellanarius. This small rodent is the only living species in its genus. It is 6 to 9 centimetres (2.4 to 3.5 in) long with a tail of 5.7 to 7.5 centimetres (2.2 to 3.0 in). It weighs 17 to 20 grams (0.60 to 0.71 oz), increasing to 30 to 40 grams (1.1 to 1.4 oz) just before hibernation. The hazel dormouse hibernates from October to April/May. In British sources, it is normally called the dormouse rather than the hazel or common dormouse.

The locations in the UK where the hazel dormouse can be found is shown on the National Biodivestity Network website.

The hazel dormouse is a European Protected Species and is protected in the UK under the Wildlife and Countryside Act.

The hazel dormouse is the only small mammal in Britain to have a completely furry tail. It has golden-brown fur and large black eyes. It is a nocturnal creature and spends most of its waking hours looking for food in trees. It will make long trips in tree branches instead of coming down to the ground. This is to avoid danger.

In winter (early October), the hazel dormouse will hibernate in nests beneath the leaf litter on the forest floor. When it wakes up in spring (late April or early May), it builds nests out of honeysuckle bark, fresh leaves and grasses. If the weather is cold and wet and there is not much food, it saves energy by going into torpor (a temporary hibernation). It curls up into a ball and goes to sleep. The hazel dormouse spend a large amount of its life sleeping, either hibernating in winter or in torpor in summer. 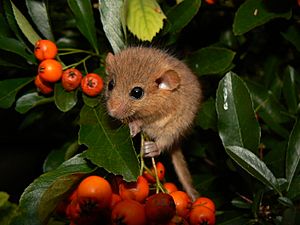 Examination of hazelnuts may show a neat round hole in the shell. This shows that it has been opened by a small rodent like the dormouse, wood mouse, or bank vole. Other animals including squirrels or jays will either split the shell completely in half or make a jagged hole in it.

If you look closer at the hole, the inner rim of the hole will have toothmarks which are at an angle to the hole (if it has been made by a dormouse). The toothmarks are parallel with rough marks on the nut surface if a wood mouse made the hole. The bank vole leaves parallel grooves with no rough marks.

It feeds on a different foods which it can find in trees:

Trees and shrubs which are important to dormice

All content from Kiddle encyclopedia articles (including the article images and facts) can be freely used under Attribution-ShareAlike license, unless stated otherwise. Cite this article:
Hazel dormouse Facts for Kids. Kiddle Encyclopedia.