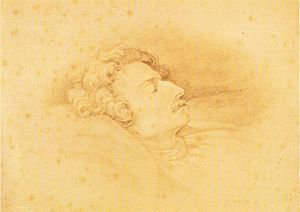 Christian Ludwig Schuncke (21 December 1810 – 7 December 1834) was a German pianist and composer, and close friend of Robert Schumann. His early promise was eclipsed by his death from tuberculosis at the age of 23.

He was generally known as Ludwig, and that name also appears as Louis in some references. His surname appears as either Schuncke or Schunke.

All content from Kiddle encyclopedia articles (including the article images and facts) can be freely used under Attribution-ShareAlike license, unless stated otherwise. Cite this article:
Ludwig Schuncke Facts for Kids. Kiddle Encyclopedia.