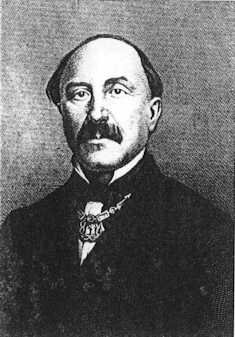 Luigi Carlo Farini (October 22, 1812 - August 1, 1866) was an Italian physician, statesman and historian. Farini was born at Russi, now in the province of Ravenna. He graduated with a degree in medicine in 1832 at the University of Bologna. Later he worked as a physician, researching intermittent fevers and rabies.

Farini was initially a republican and a supporter of Giuseppe Mazzini. Later he became a monarchist and member of the "Historic Right". In 1851 he was, for a few months, Minister of Education of the Kingdom of Sardinia in the government led by Massimo D'Azeglio.

He was dictator pro tempore of Emilia from July 20, 1859 to March 13, 1860. He had the same role in Romagna from November 9, 1859. Farini was appointed President of the Council of Ministers of the Kingdom of Italy in the December 8, 1862. However, he was struck by a nervous disease that would take him to madness. During the Polish uprising of January 1863, he threatened the king Victor Emmanuel II with a knife. This was because he wanted to force him to declare war against the Russian Empire. As a result of this act, he was commitmed to the asylu of Novalese, a small town near Turin. Farini died at Genoa in poverty in 1866.

All content from Kiddle encyclopedia articles (including the article images and facts) can be freely used under Attribution-ShareAlike license, unless stated otherwise. Cite this article:
Luigi Carlo Farini Facts for Kids. Kiddle Encyclopedia.