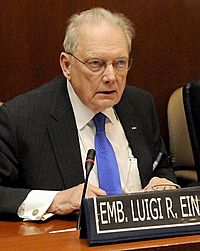 Luigi R. Einaudi (born March 1, 1936) is an American politician. He was Acting Secretary General of the Organization of American States (OAS) in October 2004 after the resignation of Secretary General Miguel Ángel Rodríguez. He left the job in May 2005 when José Miguel Insulza replaced him.

From 1989 to 1993, Einaudi was the U.S. Ambassador to the Organization of American States during the George H. W. Bush presidency.

Einaudi was born in Cambridge, Massachusetts. He studied at Harvard University.

All content from Kiddle encyclopedia articles (including the article images and facts) can be freely used under Attribution-ShareAlike license, unless stated otherwise. Cite this article:
Luigi R. Einaudi Facts for Kids. Kiddle Encyclopedia.