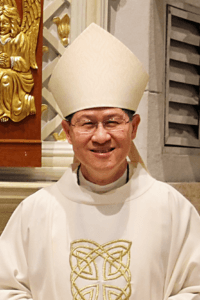 Luis Antonio Gokim Tagle (Tagalog: [lʊˈwis ɐnˈtonɪo 'taɡlɛ]; born June 21, 1957) is a Filipino cardinal of the Catholic Church, and Prefect of the Congregation for the Evangelization of Peoples since December 2019.

He was the 32nd Archbishop of Manila from 2011 to 2020. Tagle also was the president of Caritas International and of the Catholic Biblical Federation. He was born in Manila.

He is well known for his progressive views and for his works on helping the poor in the Philippines.

All content from Kiddle encyclopedia articles (including the article images and facts) can be freely used under Attribution-ShareAlike license, unless stated otherwise. Cite this article:
Luis Antonio Tagle Facts for Kids. Kiddle Encyclopedia.