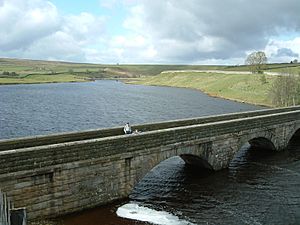 Grassholme Reservoir and Bridge, Lunedale. The flat grass hill on the horizon is in fact the dam of Selset Reservoir.

Lunedale is the dale, or valley, of the River Lune, on the east side of the Pennines in England, west of Middleton-in-Teesdale. Its principal settlements are Grassholme, Thringarth and Bowbank.

Lunedale was historically in the North Riding of Yorkshire, but since 1974 has been in County Durham.

The River Lune flows through Lunedale before reaching Teesdale where it joins the River Tees. The river flows through two reservoirs on the way: Selset Reservoir and Grassholme Reservoir. Running roughly parallel to Lunedale to the south is Baldersdale.

The Pennine Way passes through Lunedale on its way to Middleton-in-Teesdale, and crosses Grassholme Bridge over Grassholme Reservoir.

A former railway viaduct from the now-closed Barnard Castle to Middleton-in-Teesdale line crosses the River Lune just north of Mickleton.

All content from Kiddle encyclopedia articles (including the article images and facts) can be freely used under Attribution-ShareAlike license, unless stated otherwise. Cite this article:
Lunedale Facts for Kids. Kiddle Encyclopedia.