Historically, Mākaha was an ahupuaʻa, or area of land ruled by chief or king and managed by the members of the ʻaliʻi.

Mākaha (Hawaiian for “fierce” or “savage”) is a census-designated place (CDP) in Honolulu County, Hawaiʻi, United States. It’s a town located along the Pacific Ocean, west of the Mākaha Valley, and at the foot of Mt. Ka'ala in the Wai’anae Mountain Range. It is the last of the leeward towns on O'ahu. North of Mākaha is little development, i.e. no towns, no gas stations, or restaurants. The population of Mākaha was 8,278 at the 2010 census. It is located 35 miles northwest of Honolulu, but is a part of Honolulu County.

In Hawaiian language its name means “fierce” or “savage”, which refers to the group of bandits who were based in the Mākaha Valley. They would hide and wait for unsuspecting passersby to show up, and then plunder and pillage them. Mākaha has a higher percentage of Native Hawaiians and other pacific islanders than most settlements on O’ahu, 26.2% of the population were pacific islanders in 2010. Mākaha Resort stages weekend traditional Hawaiian arts and crafts fairs and other Hawaiian cultural programs in order to preserve the Native Hawaiian traditions in Mākaha.

The town is particularly known for its surfing waves and surfing history, the Hawaiian temple Kāne’āki Heiau, and Mākaha Beach Park, which is a nesting place for several species of sea turtles. Aside from surfing, other water activities include diving, canoe-surfing, fishing, tandem surfing, bodysurfing, and other recreational water sports. Kāne’āki Heiau is Hawaii’s most thoroughly restored ancient heiau, it was excavated by Bishop Museum archeologists in 1970 and can now be visited Tuesdays-Sundays. It originated as an agricultural temple to the god Lono in the 15th century. 200 years later, it was converted into a luakini, where human sacrifices were dedicated to the god Kū - a typical progression indicating Mākaha now supported a large enough population to have its own chief. 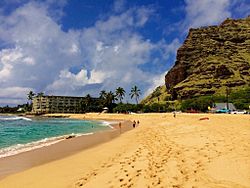 Mākaha Beach Park with the slopes of the Waianae Mountains on the right. 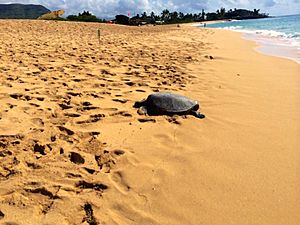 To get here by public transportation, the express city bus C (Route C – Country Express) is the most direct option, as it stays along the coast. The Bus 40 goes up to the Mākaha Valley Road to the golf courses and then goes down Kili Drive to the Mākaha Beach Park. It leaves daily from the Ala Moana Shopping Center in Downtown Honolulu. By car, you would want to follow Kamehameha Highway just north off Pearl Harbor, and then onto Farrington Highway (93) in the west. You would want to follow Farrington Highway northbound on Oahu’s west shore until you pass the neighboring town of Waiʻanae. The town of Mākaha is next, and the last one of the leeward towns on O’ahu. Mākaha Beach Park in the town center is located on 84-369 Farrington Hwy, Makaha HI 96792. 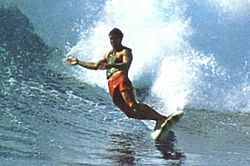 Mākaha was the site of the Mākaha International Surfing Championships 1954-1971. During the 60's, Fred Hemmings won the championship four times.

Surfing is sometimes recognized as starting in Mākaha in the early 1950s, even though it’s most likely been utilized as a surfing spot for Native Hawaiians for hundreds of years. During summer, the waves tend to be at maximum four feet; however, during the winter surf season, the waves often exceed fifteen feet. Attracted by these waves, sometimes as high as 25 feet high, the Waikīkī Surf Club established the Mākaha International Surfing Championships in 1952, the first of the many international surfing contests that are now held in Hawaii. One of the most popular events still held at Mākaha is Buffalo’s Big Board Contest, an annual surf contest named in honor of Mākaha lifeguard and surfing legend Richard “Buffalo” Keaulana. In these waters Buffalo not only invented some of the most outrageous methods of surfing, but also raised his world champion son Rusty. He also made Mākaha the home of the world’s first international surf meet in 1954 and still hosts his Big Board Surfing Classic. Rell Sunn’s Menehune Triple Lei of Surfing is another annual surfing event that finds place in Mākaha. Besides Mākaha Beach Park, other surfing areas in Mākaha includes for instance Aki’s Beach, the Blowhole, Bowl, Charlie’s Reef, and Cornets.

There were 2,388 households out of which 37.8% had children under the age of 18 living with them, 44.9% were married couples living together, 19.6% had a female householder with no husband present, and 27.9% were non-families. 20.8% of all households were made up of individuals and 5.3% had someone living alone who was 65 years of age or older. The average household size was 3.20 and the average family size was 3.70.

All content from Kiddle encyclopedia articles (including the article images and facts) can be freely used under Attribution-ShareAlike license, unless stated otherwise. Cite this article:
Mākaha, Hawaii Facts for Kids. Kiddle Encyclopedia.