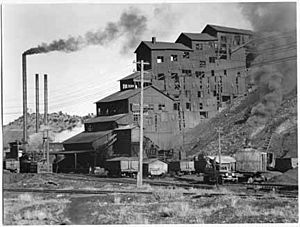 Madrid (/ˈmædrɪd/, Spanish: [maˈðɾið]) is a census-designated place (CDP) in Santa Fe County, New Mexico, United States. It is part of the Santa Fe, New Mexico Metropolitan Statistical Area. The population was 149 at the 2000 census and 204 in 2010. Today, Madrid has become an artists' community with galleries lining New Mexico State Road 14 (the Turquoise Trail). It retains remnants of its history with the Mineshaft Tavern and the Coal Mine Museum.

Lead mines in the area around Madrid captured the interest of Roque Madrid in the 17th century. It is unclear whether the current name of the community comes from that of earlier residents or the capital of Spain. The dominant English pronunciation of the name differs from that of the Spanish capital, with emphasis on the first syllable: MAD-rid. Coal mining began in the area around 1835.

The coal deposits were called the Cerrillos Coal Bank following the arrival in early 1880 of the New Mexico & Southern Pacific Railroad (as the AT&SF in New Mexico was organized), named after the nearby mining and railroad town of Cerrillos Station. After a dozen years at the Coal Bank of wildcat, unpermitted, and unorganized mining the AT&SF acquired the property on December 10, 1891, and through purposefully-created subsidiaries solidified its control. The Cerrillos Coal & Iron Co. developed the layout for the town, mines, and facilities, and the Cerrillos Coal Railroad Co. built the 6.25-mile standard gauge spur from the AT&SF main line at Waldo Junction.

In late August 1892, the spur finally terminated at the relatively new mining camp of Keeseeville (an illegal trespass settlement, however one whose 20-acre plat had been approved by Santa Fe County). At the site of Keeseeville, which the Cerrillos Coal Railroad co-opted, the town of Madrid was built. More accurately the Cerrillos Coal Railroad transported-in, section by section, prefabricated wooden miner's cabins from as far away as Topeka, Kansas; there were insufficient carpenters and suppliers in the region to provide the instant infrastructure that was needed for the town.

Madrid celebrated its "founding" in 1895. Since the town was for the next 80 years wholly owned by a series of corporations, the town itself was never incorporated. From the late 1940s, the demand for coal withered: Natural gas gradually replaced coal as the preferred home-heating fuel, and the AT&SF was replacing its coal-fired steam locomotives with diesel-electrics. By 1954 the Albuquerque and Cerrillos Coal Company ceased to operate and most of the residents moved away. The railroad spur was removed shortly thereafter.

The Miners were started by the Madrid Employees Club and won many pennants. The Oscar Huber Ballpark was the first lighted ballpark west of the Mississippi in the 1920s.

According to the United States Census Bureau, the CDP has a total area of 1.4 square miles (3.6 km2), all land.

There were 82 households out of which 17.1% had children under the age of 18 living with them, 20.7% were married couples living together, 11.0% had a female householder with no husband present, and 65.9% were non-families. 52.4% of all households were made up of individuals and 4.9% had someone living alone who was 65 years of age or older. The average household size was 1.82 and the average family size was 2.68.

The ending of the film Wild Hogs (2007) was set and filmed in the town.

Belinda Vasquez Garcia's novel, The Witch Narratives: Reincarnation (2012), is set in Madrid during the 1920s and 1930s when Madrid was a company-owned coal-mining town.

Madrid and details about the town's attractions are mentioned in chapter 15 of A.J. DeWall's novel, Forever Man (2014).

In the opening scene of Breaking Bad (season 5) episode 14 ("Ozymandias"), Walter White takes a break after his first methamphetamine cook to phone his wife, Skyler, to suggest the family do something the show's creator (Vince Gilligan) says he and his girlfriend did: "head up to Turquoise Trail and stop at Tinkertown, maybe grab some lunch in Madrid".

All content from Kiddle encyclopedia articles (including the article images and facts) can be freely used under Attribution-ShareAlike license, unless stated otherwise. Cite this article:
Madrid, New Mexico Facts for Kids. Kiddle Encyclopedia.