The Makarora River is in the Otago region of the South Island of New Zealand.

The headwaters are in Mount Aspiring National Park, on the eastern flanks of the Southern Alps near Haast Pass, which is the saddle between the Makarora and Haast River valleys. The Makarora River flows south into the northern end of Lake Wānaka after passing the small community of Makarora. The river attracts some recreational fishing, jetboating and kayaking. Rainbow and brown trout migrate from Lake Wānaka up the river and its tributaries to spawn, mainly in autumn and winter.

In September 2007 a landslide in the Young River valley blocked off the corresponding stream. Young River is a tributary to Makarora River. The landslide created a new lake. The lake appears to be permanent.

State Highway 6 follows the Makarora River for the majority of its course from just south of Haast Pass. A popular short walk leads to its confluence with the Blue River, at the aptly named Blue Pools. Cameron Flat Campground is a convenient campsite with a cooking shelter and bathrooms directly off State Highway 6. 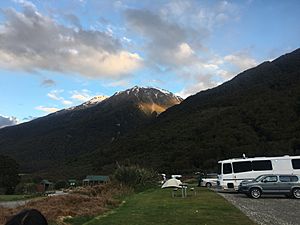 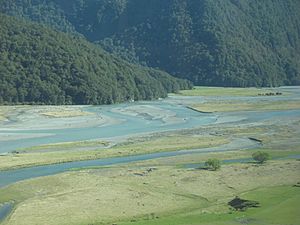 All content from Kiddle encyclopedia articles (including the article images and facts) can be freely used under Attribution-ShareAlike license, unless stated otherwise. Cite this article:
Makarora River Facts for Kids. Kiddle Encyclopedia.