The Haast Pass / Tioripatea is a mountain pass in the Southern Alps of the South Island of New Zealand. Māori used the pass in pre-European times.

The pass takes its name from Julius von Haast, a 19th-century explorer who also served as provincial geologist for the provincial government of Canterbury. Following the passage of the Ngāi Tahu Claims Settlement Act 1998, the name of the pass was officially altered to Haast Pass / Tioripatea. 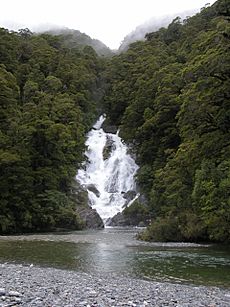 Fantail Falls, in the Haast Pass

It is one of the three passes where a road crosses over the Southern Alps – alongside the Lewis Pass and Arthur's Pass, although the Homer Tunnel passes under the Main Divide. The road through Haast Pass (State Highway 6) was converted from a rough track to a formed road in 1966 and received a complete chipseal surface by 1995.

The Haast Pass rises to a height of 562 metres (1,844 ft) above sea level at the saddle between the valleys of the Haast and Makarora Rivers. As such, it is the lowest of the passes traversing the Southern Alps. No settlements exist on the Haast Pass road between Haast and Makarora. The road passes through predominantly unmodified beech forest. The pass itself lies within the limits of Mount Aspiring National Park and forms part of the boundary between Otago and the West Coast.

Ngāi Tahu used the pass to cross from Lake Wānaka to the West Coast. At the time of European exploration, it was notorious for its use in 1835 by a war party led by Te Pūoho-o-te-rangi; a surprise crossing enabled Te Pūoho to ambush seasonal villages in the Makarora valley.

Europeans first learnt of the pass when Huruhuru drew a map for the explorer Edward Shortland in 1844. The first European ascent was from the Wānaka side in March 1861, when the exploring survey John Holland Baker, seeking new sheep country, looked down from the saddle towards the West Coast. Charles Cameron, a gold prospector, claimed to have made the first crossing to the coast in 1863. However he was widely believed to have only got to the upper reaches of the Haast River / Awarua. The honour of first official crossing was claimed by Julius Haast, Canterbury's provincial geologist, who led a five-man expedition in January 1863. He named the Haast River after himself, "directed, so he said, by his provincial superindendent", and returned to Lake Wānaka "nearly shoeless" after six weeks.

In the early 20th century, a railway from the West Coast through the pass to Otago was suggested by local MP Tom Seddon; it would have linked the Ross Branch with the Otago Central Railway, which then terminated in Omakau. However, the line never came to fruition; the Otago Central Railway terminated in Cromwell and no railway was built south of Ross, just a lightly laid bush tramway to serve logging interests near Lake Ianthe.

All content from Kiddle encyclopedia articles (including the article images and facts) can be freely used under Attribution-ShareAlike license, unless stated otherwise. Cite this article:
Haast Pass / Tioripatea Facts for Kids. Kiddle Encyclopedia.