Manasota Key is a census-designated place (CDP) consisting mainly of the community of Englewood Beach in Charlotte County, Florida, United States. The population of the CDP was 1,229 at the 2010 census. It is part of the Punta Gorda Metropolitan Statistical Area.

The name "Manasota Key" refers to an 11-mile-long (18 km) peninsula (transformed into a barrier island by the Gulf Intracoastal Waterway) that continues north into Sarasota County. The community of Englewood Beach occupies the Charlotte County portion of the key, while the Sarasota County part of the peninsula contains the community of Manasota Beach. The key continues north as Caspersen Beach, extending as far as the Venice city limits.

The Manasota Key CDP is located in the northwestern corner of Charlotte County at 26°56′N 82°22′W﻿ / ﻿26.933°N 82.367°W﻿ / 26.933; -82.367 (26.9260, -82.3596). As noted above, the barrier island of the same name extends north well into Sarasota County. Its western edge is the Gulf of Mexico, and to the east is Lemon Bay, an estuary. The community of Englewood Beach occupies most of the CDP, and it is connected to the mainland by Beach Road, which crosses Lemon Bay to Englewood. The southern end of the CDP, which includes Manasota Key, Peterson Island, and Whidden Key, is covered by Stump Pass Beach State Park. Stump Pass is a channel that connects Lemon Bay to the Gulf of Mexico and separates Manasota Key from Don Pedro Island to the south. Grove City is located directly to the east across Lemon Bay from the south end of Manasota Key. 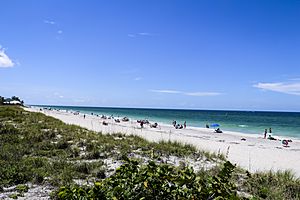 Englewood Beach (previously known as Chadwick Beach) occupies the Charlotte County part of Manasota Key, connected to Englewood by Beach Road. It is a popular attraction for visitors to the area, particularly during the "spring break" period. During the winter months, many part-time residents of the area return from northern states to their winter homes (referred to by locals as "snowbirds").

There are limited paid parking facilities located by the beach. From 9:00 AM until 4:00 PM parking fees are 75 cents per hour. There are restrooms, showers and picnic tables available for public use, with commercial eating establishments within a short walk.

There were 769 households out of which 3.5% had children under the age of 18 living with them, 57.0% were married couples living together, 2.2% had a female householder with no husband present, and 40.3% were non-families. 35.9% of all households were made up of individuals and 23.7% had someone living alone who was 65 years of age or older. The average household size was 1.75 and the average family size was 2.16.

All content from Kiddle encyclopedia articles (including the article images and facts) can be freely used under Attribution-ShareAlike license, unless stated otherwise. Cite this article:
Manasota Key, Florida Facts for Kids. Kiddle Encyclopedia.